Is this the end for Bree, Karl or Orson on Desperate Housewives? 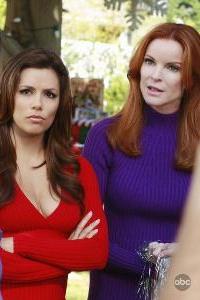 The
December 6 Desperate Housewives climatic plane crash gave the Bolens a free pass and likely brought Lynette
and Gaby back together, but fans are anxious to know who got caught in the rubble of Santa’s workshop. Was it Bree (Marcia Cross), Karl or
Orson?

It was a less than festive holiday on Wisteria Lane, from the start. A hospitalized Katherine blamed her self inflicted stabbing on Mike, Nurse Mona decided to blackmail the Bolens, and the Scavos
and Solíses were at war over Lynette’s firing.

Most important in the world of cliffhangers, however, was Bree finally earning her freedom from Orson with a round of blackmail. She was left feeling guilty and that only got worse when she
accidentally revealed she was having an affair.

She promises to save Orson’s feelings by keeping it a secret until he left town, but that was before she knew her new beau Karl (aka Susan’s ex) was planning a romantic, high in the sky Christmas
proposal.

Could it get any worse? Indeed it could: The pilot hired to fly the “Marry Me” banner was having his own marital dramas and the result was a heart attack in the sky. His widow was left to take
control, crash landing the plane on Wisteria Lane.

There was an upside. The Bolen’s don’t have to worry about Mona anymore, as she was taken out by a wing, and Lynette got to save Gaby’s daughter from the crash, which can only help them moved past
their spat.

All’s well that ends well… except that wasn’t the end for Desperate Housewives. We
know how pregnant Lynette fared after grabbing Celia out of harms way and the plane continued on, taking out Santa’s workshop, where Karl and Orson were fighting it out and Bree was trying to stop
them!

With no survivors spotted in the rubble, we caught a glimpse of a limp, bloody hand hanging out a broken window. A left hand with no ring…Orson was wearing a ring at the fight’s start, but
anything could have happened during the three way spat, which means it could be Bree, Karl or Orson…and where are the other two, anyway?

Talk about a holiday cliffhanger — we won’t learn what happened until Desperate Housewives returns in January!

The Good Wife is a hit!