In its third week in theaters, The Blind Side takes the weekend box office, thanks largely to word of mouth, and SheKnows is thrilled to brag that we helped spread that word!

The Blind Side, a film about a homeless teen hit home with both men and women by combining family and football. Its “surprising” success has everyone talking about star Sandra
Bullock, whose last movie The Proposal ranked as 11th-highest-grossing movie this year with $164 million, but SheKnows says it’s no surprise. We saw it coming! 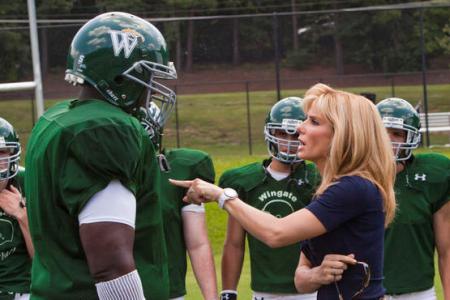 True, we had a head start. Not only did we get a chance to catch the movie early and write this rave Blind Side review, but we
also landed some inspiring interviews.

We got a look at the story behind the movie from real life hero Leigh Ann Tuohy and we also ran an exclusive video interview with Sandra Bullock and Tim McGraw. We were so
excited, we even ran a sweepstake to send someone to the show!

While the film jumped over New Moon, however, Summit Entertainment isn’t likely complaining. The Twilight Saga: New Moon
is holding strong at two, having brought in $570.1 million worldwide!

Brothers, a war film about life after Afghanistan and post traumatic stress disorder, came in at third with $9.7M. Fans didn’t
turn out in droves for this heavy topic, but it was a decent showing for the all star cast of Tobey Maguire, Jake Gyllenhaal and Natalie Portman.

The rest of the top ten list is below, but three small scale releases also bare mention. Transylmania brought in $274,000 with only 1,005 locations, Up in the Air road Oscar buzz
to earn about $79,000 with only 15 theaters and Disney’s The Princess and the Frog added another $744,000 from only two locations. The next Disney classic arrives in theaters nation-wide
December 11.

That means Disney’s animated tale should shake things up next week when it goes on wide release, while Up in the Air has it’s eye on Christmas week.

Up in the Air with its star Anna Kendrick