Wonderful World star Matthew Broderick has rarely been seen as he is in the Josh Goldin film. Perhaps his turn in or Election comes close, but this career copyeditor has more of an aptitude for finding typos and none within his personal life.

Wonderful World befits its title in how the comedy reflects a positive attitude in life despite what many would consider roadblocks. Broderick is Ben Singer, who despite his name, never came close to making a living as a children’s folk singer. 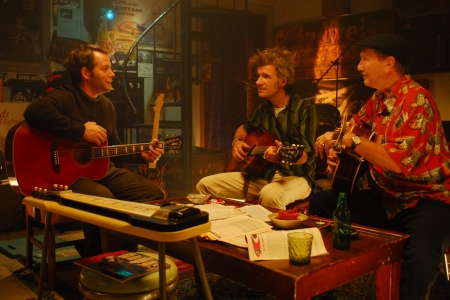 Ben is also a “weekend dad” who sees his daughter (Jordelle Ferland) but a few days out of every week. Broderick’s character life takes a turn when his Senegalese roommate
(Michael Kenneith Williams from The Wire and The Road) who suddenly becomes gravely ill. Ben spearheads an effort to get
the city to take responsibility for making his roommate sick and in the process finds his life purpose as never before.

In its effort to be true to its story, Wonderful World features original music as well as a cameo performance by acclaimed musician Dan Zanes. Many consider Zanes the leader of the modern
independent kids’ music movement.

Wonderful World is now available on VOD, Amazon and XBox Live and will open in theatres January 8, 2010.

Up in the Air’s Anna Kendrick interview