Although Lady Gaga’s been nominated for a Grammy Award for Album of the Year, it’s easy to forget the New York-based entertainer worked her way up to stellar star status. 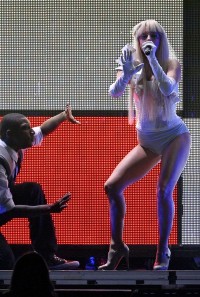 Lady Gaga tells the January issue of
ELLE magazine that she waited tables as a waitress in Manhattan.

“I was really good at it,” she dishes. “I always got big tips.” Plus, while the Bad Romance singer was waiting tables, she was rocking out to her own individual
style by always wearing heels to work. “I told everybody stories, and for customers on dates, I kept it romantic. It’s kind of like performing.”

By always stating in a performance mode, the 23-year old Lady Gaga says she’s experienced symptoms similar to that of a pregnant woman. “I get all the symptoms of a pregnant woman. I
get headaches, I get tired, I get blurred vision sometimes during a really intense session with [design collective] the Haus [of Gaga].”

As for whether or not the performer of The Fame Monster album wants to have children at some point? Lady Gaga says yes but not any time soon. “Of course, yeah. I mean, not tomorrow! But in
eight to 10 years, I want to have babies for my dad to hold, grandkids. I want to have a husband who loves me and supports me, just the way anybody else does.”

The new pop artist has paid her dues through the circuit by performing at seedy clubs and the never-ending quest for self-promotion. Lady Gaga explains on her website, “I played every club in
New York City and I bombed in every club and then killed it in every club and I found myself as an artist. I learned how to survive as an artist, get real, and how to fail and then figure out who I
was as singer and performer. And, I worked hard.”

Gaga on Gossip Girl? Get out!