Susan Boyle broke into our collective conscious with her surprising performance of I Dreamed A Dream, and now she’s finally living her dream by scoring the number one album across the world! 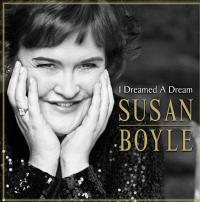 Her
first album, named for the song that first brought her acclaim, blew up the chart with 700,763 in sales and broke records by gaining the highest first week sales of 2009 and becoming the biggest
selling female debut album in history! Not only that, but Boyle bested new albums by Adam Lambert, Shakira, Lady Gaga, Beyonce and Britney Spears!

With nearly three million copies sold worldwide already, Boyle’s debut album has also taken the number one spot on the charts in the
UK, Australia, Ireland, Canada and New Zealand.

“I’m incredibly proud of Susan and delighted for her,” raved Simon Cowell. “This success couldn’t have happened to a more deserving person. Susan Boyle quite simply has broken the rules, her story is like a Hollywood movie but this time its real life and a really talented, nice lady who
has won.”

Back when Boyle first took the stage on Britain’s Got Talent on August 2008, however, Cowell, along with the other judges and the British audience, was clearly not expecting much of
the unemployed, 47-year-old plain Jane from a tiny cluster of Scottish villages.

As she happily prepared to sing I Dreamed A Dream from Les Miserables, the cameras caught several folks judging this book by her cover and openly grimacing and cringing over what
was to come.

From there, record breaking sales were no surprise. The debut album took the number-one spot on Amazon within 48 hours of its unannounced placement on the site and quickly became the largest CD
pre-order in the history of the Amazon.com Music Store, QVC and Barnes & Noble Online.

“Susan Boyle possesses a relatable quality that is easily understood and meaningful to her many loyal fans,” said Steve Barnett, Columbia Records Chairman. “They watch her every move,
whether on YouTube, Facebook, or Susan’s own website, and respond with sincerity that matches Susan’s own genuineness. The connection between Susan and her fans is unique and most
importantly, real. They’ve put her where she is today.”

The album is composed a selection of covers of songs that resonate with Boyle, including I Dreamed A Dream, Cry Me A River, The Rolling Stones’ Wild Horses, Madonna’s
You’ll See and The Monkees’ Daydream Believer, as well as the original recording written for Boyle, Who I Was Born To Be.

SheKnows, like her millions of fans, is thrilled to see Boyle become who she was born to be.