When you think of the Rolling Stones, you may think about their rocker Mick Jagger but aging Rolling Stone, Ronnie Wood, was released on bail after being arrested for a possible domestic assault. Wood has been part of the Rolling Stones since 1975 and has been touring the globe with them for the past three decades. He is also an artist and sells painting in a variety of galleries. 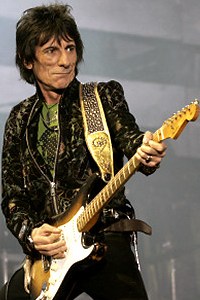 Wood is best known for his Rolling Stones guitar riffs along with a somewhat over-the-top private life. In southern England he was picked up near his home by police. In fact,
Wood’s spokesperson did not deny the report. I can confirm that there was an incident last night and that Ronnie Wood was arrested.

Wood was in the news last year due to his highly publicized divorce on the grounds of adultery after being married for twenty-four years. After he started dating a 20-year-old Russian cocktail
waitress, his marriage simply collapsed. Since he is in England, the tabloids in Great Britain has frequently printed photographs of the aging rocker with his current girlfriend.

Details surrounding the arrest have been kept under wraps because the incident is still under investigation. It’s not clear as to who made the assault complaint against the guitarist.

The 62-year old was taken into custody related to an incident on Claygate High Street. This street is a popular street near an affluent town southwest of London. Wood spent last night in police
custody before being released on bail today to face further inquiries next month.

Tiger’s tape: the sound of guilt