The union that represents nearly 3,000 of NBC’s producers, writers and technicians is threatening to boycott tonight’s Christmas in Rockefeller Center special, calling the network a holiday Grinch. The network’s response: We’re not the Grinches, you are! 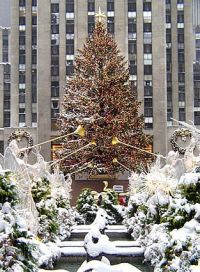 Editor’s update: This just in!

The union has decided to go on with the show. “We’re not going to let the Grinch at NBC ruin Christmas for millions of people around the world,” said the National Association of Broadcast Employees
union president Ed McEwan. “So we’re going to stay on the job. We hope that NBC sees Christmas as a time of goodwill, too, and that they negotiate a new and fair contract with us.”

Report from 12:45 pm: National Association of Broadcast Employees and Technicians (NABET-CWA) Local 11 has launched an online advertising and text messaging campaign and is ready
to boycott tonight’s annual tree-lighting affair over on NBC stalled negotiations. They’ve also posted Grinchtastic poem on their website.

The nitty gritty of the dispute seems to be about a disagreement over how technical work is assigned and, with the union’s contract having expired last March, they claim little has been
accomplished in talks that have gone on for over a year.

“We can’t let the Grinch at NBC steal another Christmas from thousands of honest working people,” said McEwan. “This charade must stop. Christmas is supposed to be a time of
goodwill, but the network’s management is trying to hide behind their fancy lights while leaving their employees in the dark.”

Oddly, at the bottom of the release about the potential strike and on the website, the union takes the time to mention that this year’s annual event will be co-hosted by Zach Levi of Chuck
and Jane Krakowski of 30 Rock, with appearances by Michael Buble, Aretha Franklin, Alicia Keys, Barry Manilow, Shakira, The Roots and The Radio City Rockettes.

Why would they include that information?

It also bears noting that the email address listed on the union press release regarding the proposed strike doesn’t work, sending back a “failed permanently” response. Should we read that as
a “no more comment?”

Now there’s a statement floating around the net from NBC, who claims the show will go on, with or without the union.

The release says: “It is ironic that NABET is apparently unhappy about lack of progress in its NBC Universal negotiations when it is the union which recently canceled three days scheduled for
negotiations, November 18, 19 and 20th. Since that time, despite the Company’s availability for meetings, the union has failed to offer alternative dates, as promised, and is apparently unwilling
to meet with NBC Universal. Progress can only be made in labor negotiations when the parties are negotiating. It is unfortunate that the union is resorting to threats as opposed to meeting its
obligation to engage in collective bargaining.”

Hmmmm…the tree-lighting ceremony, scheduled for 8 pm tonight on NBC, dates back to 1951.

Sheknows isn’t sure what to expect, but we suspect tradition will prevail.

As for the Grinch issues, we don’t have enough facts to weigh in on who is the “bad guy” here. We believe in supporting the unions, but we also have to point out that if the show does go on
without a new deal, this union has accomplished only one thing: garnering a healthy dose of free press for the event.

The Good Wife is a smash!