Tiger Woods admitted to cheating on his wife after one of his flings released text messages and voicemails from him to the media. 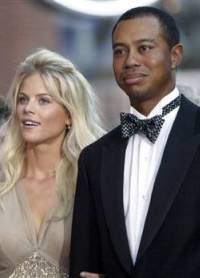 Mistress Jamiee
Grubbs gave Us Weekly the dirt, after bragging about the affair at work and playing Tiger’s messages for coworkers.

In one of the messages, Tiger begs Jaimee to remove her name from her voice mail greeting because wife Elin Nordegren “went throught my phone and may be calling you.”

And in fact, Elin did call Jaimee. The cocktail waitress told coworkers on the day after Thanksgiving — the day of Tiger’s mysterious crash — she received a call from a blocked number, and the
woman on the other end identified herself by saying, “You know who this is because you’re (censored) my husband.”

Assuming Tiger Woods is the only married man Jaimee is nailing, that call came from Elin.

Grubbs, who appeared on VH1’s Tool Academy (a course which Tiger may want to consider adding to his schedule) has more than 300 text messages from the married father of two. Grubbs says
they got it on about 20 times in three years, beginning in April 2007 — two months before Elin gave birth to their first child.

“I have let my family down and I regret those transgressions with all of my heart. I have not been true to my values and the behavior my family deserves. I am not without faults and I am far short
of perfect. I am dealing with my behavior and personal failings behind closed doors with my family. Those feelings should be shared by us alone.

Although I am a well-known person and have made my career as a professional athlete, I have been dismayed to realize the full extent of what tabloid scrutiny really means. For the last week, my
family and I have been hounded to expose intimate details of our personal lives. The stories in particular that physical violence played any
role in the car accident were utterly false and malicious. Elin has always done more to support our family and shown more grace than anyone could possibly expect.

But no matter how intense curiosity about public figures can be, there is an important and deep principle at stake which is the right to some simple, human measure of privacy. I realize there are
some who don’t share my view on that. But for me, the virtue of privacy is one that must be protected in matters that are intimate and within one’s own family. Personal sins should not require
press releases and problems within a family shouldn’t have to mean public confessions.

Whatever regrets I have about letting my family down have been shared with and felt by us alone. I have given this a lot of reflection and thought and I believe that there is a point at which I
must stick to that principle even though it’s difficult.

I will strive to be a better person and the husband and father that my family deserves. For all of those who have supported me over the years, I offer my profound apology.”

The only question that remains: Is Elin better off
staying with Tiger and enjoying all his money despite losing her dignity, or should she cut her losses and take whatever their surely ironclad prenup will give her?

Was there a Tiger Woods crash cover-up?

54 mins ago
by Avery Oliver