Julianna Margulies and The Good Wife are bringing in the numbers for CBS by giving us a behind the scenes look at the sex scandals that regularly storm the media — like say, the recent Tiger Woods mayhem.

True, Woods is not a political figure, as is the case in The Good Wife backstory, but it exemplifies where The Good Wife
has tapped into our psyche. These flash in the pan scandals ultimately have us laying the blame somewhere, but in truth, often leave us with more questions than answers:

Did he or didn’t he? Who’s really the bad guy here? Will the Kobe Special work? How could that woman stay? 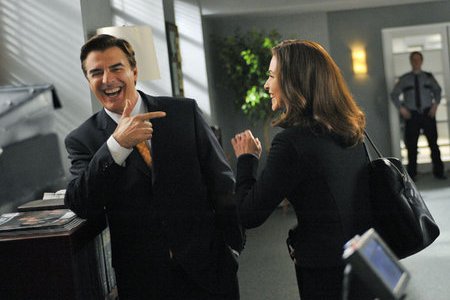 The series keeps our attention by investigating what happens behind scandals like that of New York Governor Eliot Spitzer, allowing us to glimpse more than just the media glare, even as it
investigates how that glare affects someone’s life.

The Good Wife Alicia (Margulies) has struggled to jump back into a law career, but as she’s tried to make a name for herself
professionally, she’s had to fight the name the scandal has already given her. Recognition is one of her biggest hurtles emotionally, as well.

This dichotomy was taken to another level with the introduction of the infamous “other woman,” who made a hurtful appearance on Chelsea Lately in last week’s episode. After months of
Alicia struggling with her own conflicted but angry feelings about her husband, he ultimately stood up to protect her and defend her, even earning a kiss. 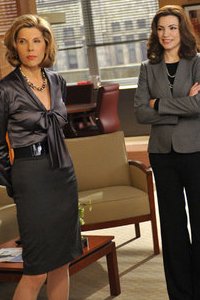 We’ll have to wait and see if that
kiss will really mean anything in terms of her taking him back, but it certainly cast light on how one starts to move forward, as does his regular assistance on her legal cases. It’s a combination
of baby steps and monumental leaps.

As the series raises new revelations about Alicia’s husband and their relationship, however, it truly excels in not isolating the scandal. Alicia’s place in this scandal plays into everything, but
it isn’t everything in her life or the show.

Storylines follow her cases, the office politics that surround them and the effort of raising two kids with the help of a mother in law who is usually going to side with her own son.

In short, it gets to the emotion and reality that never make the headlines, and that’s what keeps us tuning in. For once, we can say we really know what happened… until the next episode
reveal or cliffhanger cast a new question!

This is, after all, a soap opera – one over 13 millions of us are tuning in for!