The wannabe reality television stars for Real Housewives of D.C. have some â€˜splaining to do. The Salahi’s appeared on the Today Show this morning to tell the country they were actually invited to the White House state dinner last Tuesday night in honor of the visiting Indian prime minister. 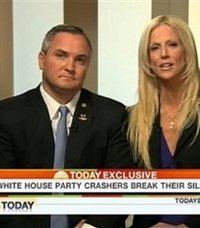 Tareq Salahi said that the
commotion regarding his and his wife, Michaele’s attendance at the dinner, was devastating. In the meantime, the White House spokesperson indicated that President Barack Obama and First Lady
Michelle Obama were angered by the incident.

Tareq indicated there was more to their side of the story although the spokesperson is adamant in saying the Salahi’s were not invited to the dinner. He said, “This wasn’t a
misunderstanding. You don’t show up at the White House as a misunderstanding.”

Tareq continued by saying he’s sad that he and his wife are being portrayed as party crashers. “I can tell you we did not party crash the White House.” In fact, his wife was
hoping to become a cast member on The Real Housewives of DC.

As details surrounding the Salahi’s appearance at the fete, other information about the couple is surfacing. For instance, the Salahi’s attended a Congressional Black Caucus party; it
is questionable as to whether or not they actually had an invitation to that event, too.

According to a spokesperson for the Congressional Black Caucus Foundation, the couple was escorted out of a foundation dinner in late September. The couple sat at a $20,000-per-table section.
Guests indicated someone was in their seats and when the Salahi’s were unable to show their tickets, they were escorted outside. The television crew from Bravo requested to shoot video
coverage at the event but was turned down due to the heavy security as a result of President Obama speaking at it.