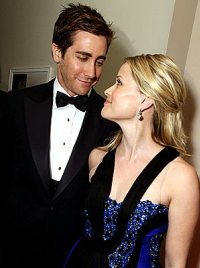 People has reported the mega-watt couple broke up after dating for two years, however the actors’ representatives quickly refuted the reports by saying it’s simply not true.

They’re the sweet Hollywood couple we simply can’t get enough of! Witherspoon and Jake met on the set for the movie Rendition in 2007 when they played husband and wife. Their representatives didn’t confirm they were a couple during that time, most likely since the down-to-earth stars dated under the radar screen.

Reese has a ten year-old daughter, Ava, and six year-old son, Deacon from her marriage to Ryan Phillippe. Reese and Ryan got divorced in 2007 and it’s not uncommon for Reese, Jake and her two kids to be seen in public together.

Although rumors about their breakup swirled, rest assured, it sounds like their relationship is distinctly intact. Although Ryan is Reese’s ex-husband, Jake’s ex, Kirsten Dunst, met the heartthrob through his sister, Maggie. Kirsten and Jake broke up in 2004.

Aside from their relationship news, this couple has been very busy focusing on their careers. Jake has several new projects in the work, the most notable being Prince of Persia: The Sands of Time. It will be released next May. Based on the video game, which follows an adventurous prince who teams up with a rival princess to stop an angry ruler from unleashing a sandstorm that could destroy the world

His next flick, Nailed, focuses on a small town waitress who accidentally gets a nail lodged in her head. In Washington, DC sparks fly as she meets a clueless young senator who takes up her cause.
Reese has been very busy on-screen as well. Her next flick is a James L Brooks project along with other films such as Pharm Girl, Around the World in 80 Dates and Under the Bridge.