Whether he’s known for his mega-watt series, Baywatch or international singing career, David Hasselhoff’s not a stranger to making headlines. Neither is his wife. 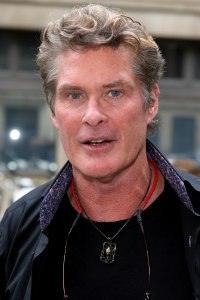 According to reports, the former power couple had a rough Thanksgiving weekend. Hoff’s ex-wife, Pamela Bach, was arrested on charges of driving
under the influence on Saturday Night. She was taken by the California Highway Patrol to the jail in Van Nuys.

Pamela Bach was later released. There was no bail however this was not the first DUI arrest for the former Baywatch star. Last March she was picked up on a felony in Los Angeles for DUI as
well.

Meanwhile, back at the ranch, her ex-husband David Hasselhoff was released from the hospital after a two day stint. Rumors are swirling as to the reason: it was originally reported that the
57-year-old star suffered a seizure at his home, however his attorney declined to confirm or deny this allegation.

A fire department spokesperson confirmed that paramedics responded to a call for help at the time his daughter called 911. In turn, David was taken to Cedars-Sinai Medical Center. The judge of
America’s Got Talent was placed under involuntary psychiatric hold under the California Welfare
and Institutions Code 5150. Net net: under this code people may be taken into custody if they pose a danger to themselves or to others, if they suffer from a mental disorder or if they are severely
impaired.

Hasselhoff has had a battle with the bottle and had reportedly been drinking the past few days. In September he was hospitalized due to alcohol poisoning and last month he seemed to be drunk while
he was a presenter during the MTV Europe Music Awards. His attorney assured reporters that he is now home and fine.