Thanksgivings are often rife with family drama, but Tiger Woods and wife Elin Nordegren had a seriously bad holiday weekend!

The convoluted story hit the weekend news cycle when Woods crashed his car into a fire hydrant in the middle of
the night after Thanksgiving. The first reports focused on alcohol not being involved and claimed his wife tried to free him by breaking a window with a golf club. 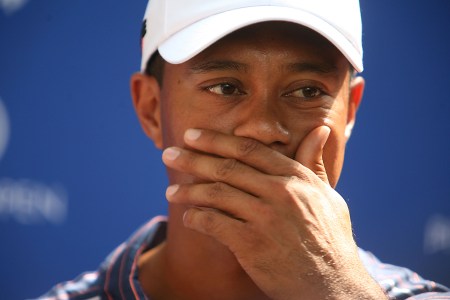 Stories continued to leak out on TMZ, however, suggesting that the accident, the broken window and his injuries were actually a result of a domestic dispute brought on by reports that
Woods had an affair with Rachel Uchitel.

One story even reported that Tiger told a friend the next day, “I have to run to Zales to get a ‘Kobe Special,'” referencing the gigantic ring Kobe Bryant bought his wife after a similar public
fiasco.

Woods has canceled all future golf tournaments scheduled for this year, but has dodged officials waiting to hear his statement, three times. He’s
also refusing to comment, claiming, “This is a private matter, and I want to keep it that way,”

This move has both sports friends and PR professional shaking their heads and insisting the golfer step out with the truth before the story gets too far ahead of him – or at least stop
dodging Florida law enforcement!

“I just hope he tells his side of the story about what happened,” ex-NBA star Charles Barkley told the New York Post. “You’ve got to face the music, because it is what it is. Not talking about it
can make it worse.”

“He’s making it look like he has something to hide,” Peggy Rose, of Rose Public Relations, told the Boston Herald. “If he made a mistake, admit it and move on. How he reacts
now will determine his future image.”

Meanwhile, the woman alleged to be at the center of it all has put out an official denial and tapped high profile attorney Gloria Allred to “handle the situation.”

“I did not have any involvement with him,” Uchitel told E! News. “Whatever was written in the Enquirer was not said by me, it was said by two people that claimed they were friends of mine
but they’re not.

“I am overwhelmed… I don’t want to get this much attention and I wish everybody would leave me alone.”

SheKnows understands the sentiment, but can’t really see that happening any time soon.