Alicia Keys is spreading the giving nature of the holiday season with her December 1 concert at the Nokia Theater in New York City. Can’t make it to Manhattan to see Keys’ musical mastery? SheKnows has a way that you can still make a difference and change the lives of those affected by AIDS all over the globe. 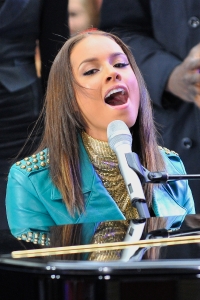 YouTube will be streaming the Alicia Keys concert live at 8 pm Eastern time. Tuning in not only results in your toes tapping to Keys’ incredible talent, but also the musician will introduce the stories of five individuals whose lives have been completely altered by the charitable nature of World AIDS Day and the youth-specific foundation, Keep A Child Alive.

The title for her Nokia New York City show is “Alicia Keys Live! One night. One voice. One life at a time.” Keys will be performing her hits as well as some tracks from her new album which will be released December 15, The Element of Freedom.

As an audience member, the thrill of watching Keys performing live on her home turf in NYC is a priceless opportunity. The ability to change a life with one text message means something priceless to someone with HIV/AIDS.

The show sold out in only minutes and the ticket sales are only one way to make a donation to Keep A Child Alive. To keep hope alive for these people in dire need of help fighting HIV/AIDS, visit www.keepachildalive.com or text ‘ALIVE’ to 90999 and donate five dollars.