Chelsea Clinton is officially engaged! The former First Daughter will walk down the aisle and there’s no doubt her father, former President Bill Clinton will give her away as her mother, US Secretary of State Hillary Rodham Clinton, will not be far away. 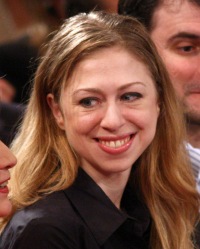 Chelsea Clinton and her
long-time boyfriend, Marc Mezvinsky, announced their engagement during the Thanksgiving weekend via e-mail. They wrote, “We’re sorry for the mass email but we wanted to wish everyone a
belated Happy Thanksgiving! We also wanted to share that we are engaged!”

The couple also said in their email to family and friends that they didn’t tie the knot this past summer, despite rumors that circulated. “We didn’t get married this past
summer despite the stories to the contrary, but we are looking toward next summer and hope you all will be there to celebrate with us. Happy Holidays! Chelsea & Marc.”

Even though they denied they were married last summer, there was copious speculation about a weekend party at Martha’s Vineyard. Nevertheless, the couple has been together for several years.

Chelsea and Marc met each other when they were teens and both attended Stanford University together. Marc is the son of a former Pennsylvania Representative, Marjorie Margolies-Mezvinsky and the
former Iowa Representative Ed Mezvinsky. Marc now works as an investment banker at Goldman Sachs in New York City. Clinton is a
graduate student at Columbia University’s School of Public Health. The couple has not set a wedding date yet although their e-mail indicates a wedding date will take place next summer.