Tiger Woods is safe after a mysterious car accident — but there are far more questions than answers in the crash. 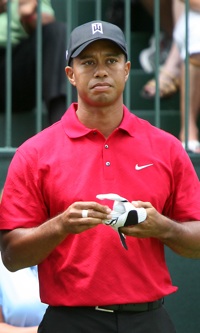 Here’s what Tiger’s wife Elin (a dishy foreign former nanny and
mother of their two kids) told cops: Tiger left the home in his SUV in the wee hours of the morning and somehow crashed into a tree and fire hydrant at the end of the driveway.

Elin, hearing the noise, came out to see what happened and bashed the window out of the SUV with a golf club to rescue him. When cops arrived Tiger was incoherent and had scratches on his face.

Police say it doesn’t appear that alcohol was a factor in the crash.

But here’s where it gets weird. Since Tiger was in no condition to chat that morning, cops came back the next day to get his version of events — but Elin wouldn’t let them in. Tiger’s lawyers
blocked their attempt the next day. No one will tell police where Tiger was going at that time of night.

What’s the problem? What really happened that night? Rumors are flying and they are not pretty. Sources are painting a picture of a marriage-shattering domestic dispute.

Word is that Elin caught wind of Tiger’s alleged infidelity and flipped her lid. They say Elin attacked him, scratching his face, and chased after him with a golf club as he tried to escape in his
SUV. The minor distraction of the club smashing in his windows caused him to crash.

Tiger also allegedly later told a friend he needed to head to a jewelry store to pick up a “Kobe special… A house on a finger,” referring to the $4 million, eight-carat purple diamond Kobe Bryant gave wife Vanessa when he was charged with rape.

So why would Tiger be hiding from the cops? If the scratches on his face are from Elin, not the crash, she would be arrested for domestic battery with or without Tiger charging her.

Is Tiger staging a coverup to protect his wife in exchange for forgiveness of his cheating ways? Here’s what he has to say:

“As you all know, I had a single-car accident earlier this week, and sustained some injuries. I have some cuts, bruising and right now I’m pretty sore.

This situation is my fault, and it’s obviously embarrassing to my family and me. I’m human and I’m not perfect. I will certainly make sure this doesn’t happen again.

This is a private matter and I want to keep it that way. Although I understand there is curiosity, the many false, unfounded and malicious rumors that are currently circulating about my family and
me are irresponsible.

The only person responsible for the accident is me. My wife, Elin, acted courageously when she saw I was hurt and in trouble. She was the first person to help me. Any other assertion is absolutely
false.

This incident has been stressful and very difficult for Elin, our family and me. I appreciate all the concern and well wishes that we have received. But, I would also ask for some understanding
that my family and I deserve some privacy no matter how intrusive some people can be.”

Tiger’s statement is vague in all the right places and doesn’t confirm or deny anything; in fact, some of it can be read as a mea culpa for cheating (or at least for getting caught). Interestingly,
Elin was not the one who called 911 — a neighbor did. And the woman rumored to be Tiger’s fling has already flown to LA and hooked up with power attorney Gloria Aldred.

So what are the facts? Stay tuned…