Jake Gyllenhaal and Tobey Maguire are Brothers in an emotional and riveting tale of the cost of war and its explosive effect on one family.

Brothers also stars Natalie Portman as the woman in the middle of the emotional mayhem. 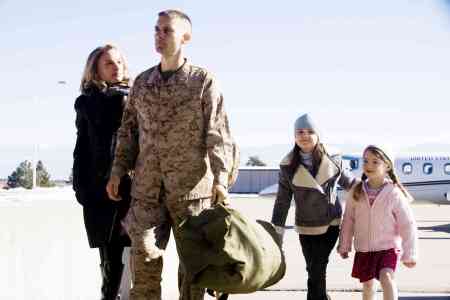 Filmmaker Jim Sheridan (In the Name of the Father, In America) always knows how to tell a compelling story and in this case, Brothers could be his most riveting. While a
Marine (Maguire) is missing overseas and feared dead fighting in Afghanistan, his younger brother (Gyllenhaal) winds up being the arms that
his high school sweetheart turns to in her grief. Captain Sam Cahill (Maguire) has two children with
Portman’s Grace and when he returns home unexpectedly, an emotional hurricane commences.

Gyllenhaal’s Tommy Cahill has recently gotten out of jail and could not be more different than his hero brother. Yet, Tommy effortlessly takes on the role of father to Grace’s kids and
before long, Grace and her kids are a whole family again.

When it becomes shockingly clear that Sam had not been killed by the Taliban Brothers truly takes a shocking turn. The enemy has subjected Sam to horrors as a prisoner that completely
erodes his confidence and in many ways, his sanity. At the same time, Tommy’s growing confidence and increasing adoration for the straight-and-narrow has these two Brothers and very
separate paths — a road that will collide with force.

Early buzz on Brothers has the terms “acting tour-de-force” being tossed around and with the talents of Maguire, Gyllenhaal and Portman, Sheridan’s Brothers is bound to inspire Academy voters as the 2009 film year closes. Sheridan tends to get Oscar-worthy
performances from his actors. In the Name of the Father’s Daniel Day Lewis won Best Actor for his part in the Sheridan
instant classic.

A SheKnows Brothers clip: the truth

Jake Gyllenhaal stars in our Prince of Persia trailer