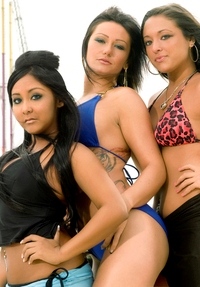 Jersey Shore will
premiere on December 3 and is being hyped to show there’s “no spray tan too orange, no hair too spiked” as it showcases its beach goers. According to UNICO (an Italian-American service
organization) National President Andre DiMino, the show is “trash television.”

Plus, the president of the National Italian American Foundation, Joseph Del Raso says, “We find this program alarming in that it attempts to make a direct connection between ‘guido
culture’ and Italian-American identity.”

While some Italians are outraged, others aren’t nearly as miffed. Regardless, MTV says the show must go on. The music network defends
the show in an effort to document rite of passages as per reality TV. They added, “The Italian-American cast takes pride in their ethnicity.”

The network also describes the show as part of its ability to focus its lens on various subcultures, uncovering a host of memorable characters in the process. “MTV peels back yet a different
curtain to follow eight young adults as they move into a summer share to indulge in everything Seaside Heights, New Jersey has to offer. Jersey Shore uncovers sometimes surprising, often
hilarious and usually over-the-top personalities as they juggle work, love, nightlife, friendship and the drama that ensues. In the end, viewers see that there is more to these tan and buff
individuals than hair gel.”

Jon and Kate Plus 8 has its finale

35 mins ago
by Sarah Mina Osman