As shoppers seek discounts for Cyber Monday, the biggest internet shopping day of the year, retailers couldn’t be more excited with the sales of Star Trek and other home video titles.

As for what will likely top the charts? According to the Hollywood Reporter, the summer box-office hit Star Trek has already topped the charts in the home-video seller category. It’s also done extremely well in the rental category. During its first week in stores, Star Trek ranked first in the Nielsen VideoScan First Alert sales chart and Home Media Magazine’s rental chart for the week ending November 22.

Get this — the flick sold approximately 5.7 million discs in its first week. According to Home Media Magazine research, this number includes all of North America and the rental market, too. 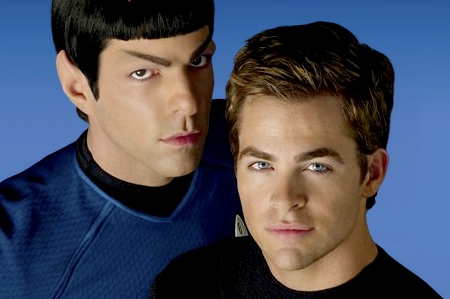 Since it’s done incredibly well in its first week, industry insiders are estimating it will continue to do well as shoppers hit the stores, as well as the online stores. Other films are expected to do well given their recent sales ranking, too. The animated film, Up, came in second place last week and My Sister’s Keeper, the Cameron Diaz drama, debuted at number three. Even Bruno which suffered lackluster film receipts in movie theaters this past summer is anticipated to do very well in the DVD sales market. This past week it ranked number four.

Let’s not forget the Twilight Saga! New Moon is anticipated to do very well in theaters again this weekend so it’s no surprise their soundtrack as well as original Twilight DVD will be a must-have item for shoppers this season. Although it was released to the home video market last March, it rose to number five on the sales chart courtesy of the New Moon opening.

Whatever shoppers decide to buy this year, odds are home video market will do extremely well whether it’s a purchase made in a store or online. Above all, live long and prosper!

Read on for more DVD news

Pixar’s Up is a DVD don’t miss
Gone with the Wind celebrates 70 years with an incredible remaster
A SheKnows Star Trek DVD exclusive: what it means to women