These were the hottest entertainment news stories for the week ending November 27, 2009. 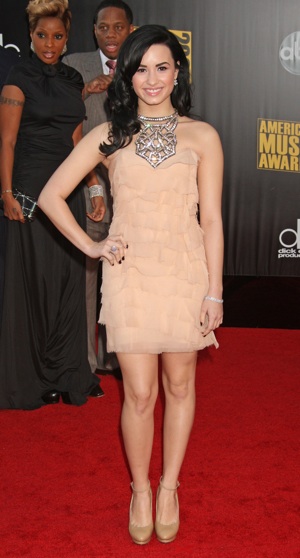 Unlike certain other Disney stars who shall remain unnamed, Demi Lovato knows you don’t have to wear hot pants and swing around a stripper pole to get noticed as a teen in the biz. Her fluttery
chiffon gown is short but not too, is in a sweet color and uses an interesting, glittery built-in necklace to draw attention instead of cleavage. While Demi is but a youngun’, this look works on
women of all ages who want to show a little skin while still maintaining some dignity.

That was some performance at the American Music Awards, huh? Adam Lambert successfully did it with at least four people — some girls, some
guys — on national television in a three minute span. It was his guy-on-guy kiss that caught most of the flack from ABC, however, and was cut from the delayed West Coast broadcast. Adam says it’s
a double-standard. Madonna, Britney and Ellen agree.

In a coup for the Osmond family, Donny won Dancing with the Stars and
beat his sister Marie Osmond’s finish from her own appearance on the show. How did he celebrate? By letting Marie hold the mirror-ball trophy, which he plans to put “at the top of my house with a
spotlight on it.”

Oprah Winfrey disappointed a lot of bored housewives (okay, okay, I Tivo it every day, too) when she announced she will be ending her ever-popular daytime talk show after its 25th season in 2011. Expect some amazing guests between now and then to wish the media mogul
well — and please don’t think she’s leaving television forever. In fact, rumor is she will start another show on her very own cable network.