Adam Lambert says the censoring of his guy-on-guy kiss by ABC is nothing but a double-standard — and it looks like he’s right. 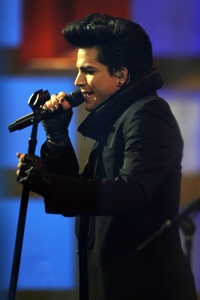 Lambert’s American Music Awards performance
was fully expressive of his apparently exuberant sexuality, ending with a deep tonguing from one of his male dancers. But not everyone saw the passion as it played out — ABC cut the kiss from its West Coast feed.

Lambert says it never would have happened if he was a chick, and CBS has proven him right. “…if it had been a female pop performer doing the moves that were on the stage, I don’t think there
would be nearly as much of an outrage,” he said the day after the performance.

In a blatant display of ignorance, CBS blurred out Adam’s kiss on a video played during an interview on The Early Show, but mere
seconds later showed a completely uncensored version of Madonna and Britney Spears swapping spit that the MTV VMA’s!

“Lady Gaga smashing whiskey bottles, Janet Jackson grabbing a male dancer’s crotch, Eminem talking about how Slim Shady has 17 rapes under his belt — there was a lot of very adult material on the
AMAs this year, and I know I wasn’t the only one,” Lambert said.

So what’s the diff between two guys kissing and two girls kissing? CBS remains mum on the issue. Maybe they prefer blondes?

“The Madonna image is very familiar and has appeared countless times including many times on morning TV. The Adam Lambert image is a subject of great current controversy, has not been nearly as
widely disseminated, and for all we know, may still lead to legal consequences,” the network said in a BS statement.

At any rate, Adam managed to keep it in his pants during his CBS Early Show performance, with nary a tongue or simulated sex act in sight.

Read on for more Adam Lambert

Adam Lambert shut down by ABC