At the Obama’s first official state dinner, President Obama toasted the “great and growing partnership between the United States and India.” After that, most of the chatter was about the VIP guest list, Jennifer Hudson’s performance and First Lady Michelle Obama’s fantastic Naeem Khan gown.

Dubbed as the hottest ticket in Washington, the black-tie affair honored Indian Prime Minister Manmohan Singh. On hand were 338 bigwigs to toast the man of the hour, including Hollywood power
players and celebs such as Steven Spielberg, David Geffen, M Night Shyamalan, Alfre Woodard, Blair Underwood and Jeffrey Katzenberg. 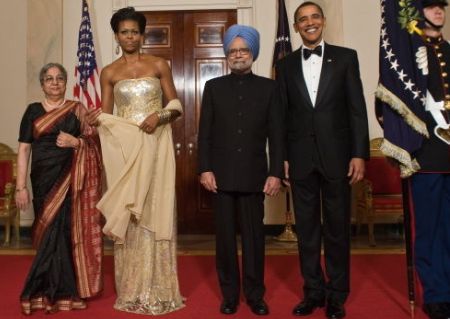 Word is, the Real Housewives of DC were even there, though they were not officially invited!

A serious news presence, which included Katie Couric, Brian Williams, Robin Roberts and Dr Sanjay Gupta, was in attendance, but SheKnows has
heard nothing of a Fox rep, perhaps because Obama has been shunning the network.

Others who made the cut included Deepak Chopra, powerful Indian businessmen, members of Obama’s cabinet, a few of Obama’s best pals and, of course, major fundraisers and supporters from his
campaign.

In honor of their Indian guests, the first lady was decked out in a stunning, glittery strapless gown that was designed by Indian-born Naeem Khan and made in his family’s shop back in India. Her
daytime wear also was the craftwork of an Indian designer. 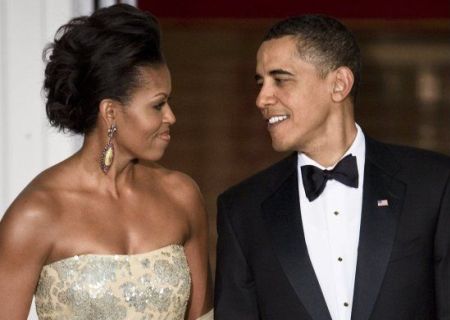 Indian touches were also evident in the entertainment for the night. Those invited to the glam tented event on the White House lawn were treated to performances from the Bay Area Empire Bhangra
dancers and Indian superstar AR Rahman, who earned international acclaim and two Oscars for the music in Slumdog
Millionaire, not to mention the National Symphony Orchestra and Chicago natives Jennifer Hudson and Kurt Elling.More Michelle Obama news

Top 10 celebrity mothers and daughters — Michelle’s on the list!