Adam Lambert didn’t intend to offend with his AMA performance, but he isn’t apologizing either. 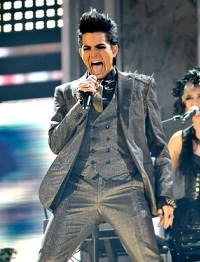 With the backlash from his sexy AMA
performance still in full swing, Lambert spoke out on CBS’ Early Show November 25, admitting he had, “no clue,
no clue at all” that his appearance would prove as controversial as it has.

“I was really looking forward to it,” Lambert said of his first televised performance since American Idol. “I worked really
hard with my dancers and my band for about two weeks putting that together. And, I admit I did get carried away, but I don’t see anything wrong with it. I do see how people got offended, and that
was not my intention. My intention was just to interpret the lyrics of my song and have a good time up there.”

He claims those moments that offended, including kissing his male keyboardist, simulating oral sex with another dancer and flipping off the crowd, “kind of came from more of an impromptu place. No,
those were not rehearsed. So I think ABC was taken a little by surprise. That wasn’t my intention. I wasn’t being sneaky. It got the most of me, I guess.”

The performer has managed to take ABC out of the crossfire, without back pedaling too much. Instead of apologizing, he made it clear that he respects why parents are upset, but then pointed out the
performance was on at almost 11 pm and reflected that it’s the parents’ job to decide what their kids watch, not his.

“I’m not a babysitter,” he maintained. “I’m a performer.”

He also noted out that that his performance wasn’t the only racy one. Janet Jackson grabbed a male dancer’s crotch, Lady Gaga was smashing whiskey bottles and Eminem rapped that Slim Shady has 17
rapes under his belt.

After repeating his belief that there’s been a double standard, since straight female performers have done as much as he did, he admitted that in retrospect, there were two things he would have
done differently.

“I’d sing it a little better,” he quipped, claiming the adrenaline affected his vocal performance. “In the future, I will probably make more of a little bit more of an effort to stay consistent
with what I do during rehearsal to what I do during the show. That is something I am learning. That way, if anyone has any problems with what I am doing, that can be explored during rehearsal.”

Finally, while he never apologized, he did say he hopes his fans (and presumably their parents) won’t hold this performance against him.

“This song on the album is one of the few songs that really explores risque, dangerous kind of edgy sexuality,” he explained. “There’s other songs on the album that are completely different.
I hope that people don’t put me into a box saying ‘Oh, he’s nasty and he’s going to be that way all the time.’ That was one performance.”

As if to prove himself, he chose to perform What Do You Want From Me, a very different song from the album, this morning.

When SheKnows wrote about the big AMA show, we wondered why Lambert was chosen to close such a big night. Considering the press the AMAs have gotten, we’re not wondering anymore! And we’re not so
sure ABC was surprised.

RealMomsGuide sounds off on Adam Lambert