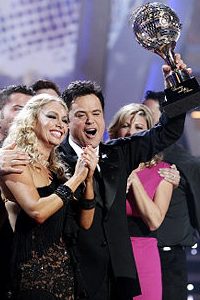 Another season of Dancing with the Stars is in the books and as Reality TV Magazine’s Paulene Hinds reported November 25, “With a brand new
dance, the season nine contestants came out and hit the floor for one last performance. If only they could have danced like that during the competition, they may still be in it.”

As only Dancing with the Stars can do with their finales, it was an evening that truly felt like a celebration from beginning to end. Comeback kid Whitney Houston took the stage twice to perform songs from her new album I Look to You, while the video segments chronicling the past
season’s accomplishments managed to seem fresh even though we’ve already witnessed them merely weeks ago.

The other element that Dancing with the Stars triumphs with their finales is the creative ways to take a five minute announcement and stretch it over two hours. With segments including a
Loser Hall of Fame induction and the return of Jerry Rice, the finale whizzed by as quickly as a perfect Jive.

For the entire report on Donny Osmond’s victory, be sure to read Paulene Hinds’ full report on Reality TV Magazine.

Read on for more DWTS news