Viggo Mortensen, to many of his female fans is a gorgeous “man’s man” who will always be the dreamy Aragorn in Peter Jackson’s Lord of the Rings trilogy. But, the star of the November 25 release, The Road, is man for all seasons. Mortensen is a true Renaissance man and his photography, painting and poetry have garnered international acclaim. 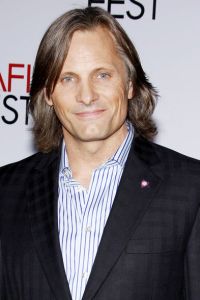 Mortensen was also nominated across the board for his performance as a morally-conflicted Russian mobster in Eastern Promises.

Mortensen has played a family man with a History of Violence and his horsemanship was displayed in the Western Hidalgo, but it is Viggo’s emotional portrayal of a shattered and
dying dad trying to save his son after a world-wide apocalypse in The Road that might be the actor’s most heart-rending and effective performance to date. It is certainly one of the most
anticipated November movies.

Based on the Pulitzer Prize-winning novel by Cormac McCarthy, The Road paints a grim
picture of mankind on the edge of extinction.

Yet, through Viggo’s performance as Father protecting his young son at all costs, pushing a shopping cart across a devastated and destroyed America, “carrying the fire” of hope has rarely appeared
so resonant. Belief in the good side of humanity as Viggo’s Father and young actor Kodi Smit-McPhee as Son emanates from The Road as they stay on the move to avoid every peril from
cannibalism to murder for their meager belongings.

They are a family in the strongest sense of the word and every woman can identify with that bond.

For the role, Mortensen, on an unlikely diet of red meat and dark chocolate, whittled his frame down to a cadaverous weight and, according to his director John Hillcoat, “it was a balancing act”.

Hillcoat praised his leading man when asked what Viggo brought to the role; “A physicality. It’s like 110 percent with him. The way he worked off of the elements, I’ve never seen anything like it.
There’s a commitment where there is no holding back. He’s an intense guy but there is also an incredible ‘every man’s face’ about him. I’ve always had this image of him in the Midwest in Grapes
of Wrath trying to make it to California”.

We’re happy to say that when we chatted with Mortensen recently in Beverly Hills, he was back to a very healthy weight and his long, blondish hair framed his chiseled face just perfectly. Mortensen
is a fellow who will lock eyes with you when he’s talking. He uses his hands a lot to make a point, showing SheKnows that “intensity” again as he spoke of his own experiences as a dad, bonding
forever with his young co-star, his reaction to the Oscar buzz for the film and just what it took to portray such a tortured human being. Picture this mega-talented hunk in casual, green/gray,
long-sleeved t-shirt and jeans.

SheKnows: This is a very demanding role. How did you mentally prepare for it?

Viggo Mortensen: I tried to do things that I thought would be helpful, like listening to certain kinds of music, watching certain kinds of movies and keeping in mind what I thought
they were headed for, visually. I read certain things and leaned on certain things that might be helpful or get me in a certain state, where I could go to those places that the character demanded
emotionally. I always do that, to some degree. Really, it’s about being naked emotionally and just being honest about it. It had to be very real and organic, which was the most daunting
thing. 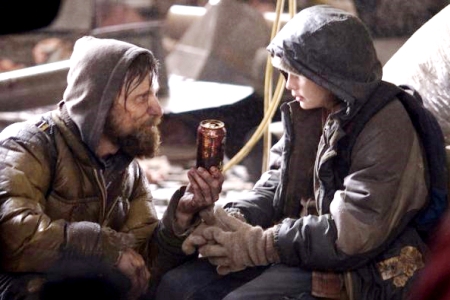 SheKnows: So you feel that, even with the difficult physical challenges, you concentrated more on the deep, emotional core of the role?

Viggo Mortensen: It wasn’t so much the physical journey, but what I would have to expose. I was like, ‘I’m going to need some help, especially from the boy (who
would play the young son). ‘I hope they find a great boy.’ I read with the last four (actors up for the role), and Kodi (Smit-McPhee) was the last one. There was something about him.
He understood the story in a way that the other kids didn’t, and there was something in his eyes. He’s a joyful, well-adjusted kid, but there was something in his eyes when he was
playing the scenes, even in the audition, that was sad and knowing. I thought, ‘Wow, this could work.’ I was really worried. I was like, ‘If we don’t have a great kid, it doesn’t matter
what I do.’

SheKnows: For research, did you really observe and visit with homeless people?

Viggo Mortensen: I’m always aware of them. I travel a lot. I did actually speak to them, just to ask them how they got that way and how they felt about it. Not all of them
wanted to talk, which was fine. Very rarely, but some were living that way by choice. Usually, it was because they had lost their job and for some it was drugs, but for most people it was just
financial hardship. There was nothing else they could do. I asked how they felt about it, how they kept alive, what things they were worried about. It’s like us. They have to figure out where
they’re going to sleep, where somebody can’t do them harm and steal their stuff. 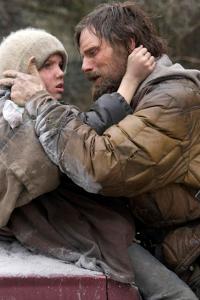 SheKnows: Very much
like Father and Son in the film. You have an adult son but were you a hands-on dad when he was little?

Viggo Mortensen: Yeah, always. Initially, when I started to do the movie, I thought about my son quite a bit, and that transition that he also made in his pre-adolescence. He
reminded me of Kodi a lot, and the character in the movie, in that he was wise beyond his years. That transition that you see in the story, where the kid is calling the dad on his strength and the
things he’d been teaching the son (reminded me of) that phase and how, sometimes, I didn’t like it, but eventually accepted it when he was right. That’s something that’s
universal. Any parent that has a relatively consistent relationship with their kids, no matter how good or bad it is, there is a point in pre-adolescence or adolescence where kids suddenly look at
their parents, and realize that they’re not gods, and they rip them sometimes. It’s such a shock.

SheKnows: Kids expect their parents to be perfect.

Viggo Mortensen: You want your dad to be that, and then, when they’re not, it can be massively disappointing, but it’s natural that that happens. Sometimes even really
good kids can be really brutal about tearing that adult off the pedestal that they had thought they were on, and it can be hard to take, as an adult. But, you have to just find a way to take it,
eventually. I remember being that way toward my dad. And then, as you get older, you start to realize, ‘Well, I’m not a god either,’ but that takes a while. If you’re tearing someone
off a pedestal, it means you’re putting yourself above them, in some way, but you don’t realize it. It’s instinctive to do. I think that’s handled really well, in the story.

SheKnows: Did you have some hesitation about committing to this role? Was it a matter of it coming at a bad time for you?

Viggo Mortensen: I was traveling. I was promoting movies and I was shooting another one. I was pretty busy. But, the moment I read it, I went out the same day and bought the book,
which I hadn’t read, even though I’d read all of McCarthy’s other books. As usual, it had a great landscape. It had a very evocative description of landscape, interior life of the
character and it was a very faithful adaptation. I was reluctant. I initially said, ‘I don’t think so.’ I said to my agent, ‘I’m really worn out. I won’t be focused.’ And then, I
looked at the story and thought, ‘Being worn out works.’ But, it does and it doesn’t. It’s hard to focus when you’re tired, obviously, and you need to really find a way to be very
relaxed to really be honest, emotionally. You can’t manipulate it, bring some research to bear on it, or force anything. You have to really be honest about how you feel. It was a different
challenge than I’ve ever had, as an actor. And, because it was so difficult, for both of us, at the end, Kodi and I have not only remained really close friends, but there was a sense of
satisfaction of having gotten through it, somehow. And then, if the movie turns out well, fine, but the actual experience was intense.

Up next…Viggo dishes on what he took away from meeting The Road author Cormac McCarthy and the Oscar talk surrounding his performance.