Mya, Kelly Osbourne and Donny Osmond will take the stage together for the Argentine Tango group dance November 23, but only one celeb will walk away the winner November 24! 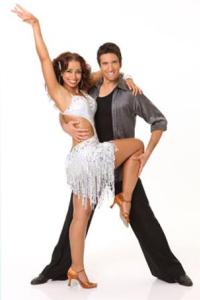 Clearly the Dancing with the Stars technical lead and a judges’ fave, Mya is working on
her Paso Doble and freestyle numbers with Dmitry and seems to be in it to win it. On Friday, she tweeted of, “Overtime rehearsals mixed w/pain+no sleep,” and then Saturday posted, “Still in
rehearsal & I’ve counted 43 bruises on my legs alone. Funny thing is, I kinda like it. Feels like I’ve been in battle:)”.

Her battle cry doesn’t bode well for Donny Osmond, who is set to do a Cha-Cha and FreeStyle with his partner Kym. More entertainer than dancer, he was sure it was all over when he saw his scores
last week.

“Seeing three ‘sevens’ in a row may mean you’re lucky in Vegas, but the same isn’t true when you’re competing on the dance floor,” he blogged on his site, but he made the cut, thanks to some
serious fan support.

Kelly, who has put off her foot surgery until after the Dancing with the Stars finale, is another
long shot, especially as she hasn’t scored a single 10 all season. Revving up to do Viennese Waltz and a campy Freestyle with Louis, she’s feeling the tension, having tweeted this morning, “I’m
sitting in camera blocking royally shitting myself!!!!!!”

The Dancing with the Stars showdown airs Novembeer 23 at 8 pm on ABC
— and don’t miss tomorrow’s results.

In addition to encore performances from the contestants and some Muppets fun, Whitney Houston is set to take the stage to sing Million Dollar Bill.