Jon and Kate Plus 8 November 23 finale has closed the book on Jon and Kate Gosselin the same day their divorce was finalized. 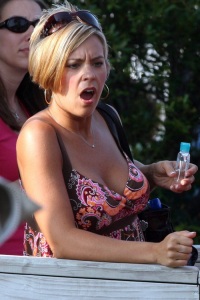 Kate Gosselin was hoping to continue on TLC with Kate Plus 8 after the reality TV
couple’s much publicized breakup, but Jon put the kibosh on that, claiming all that camera attention wasn’t good for the kids.

In fact, last night’s finale highlighted Jon’s sign on the gate, which reads, “Notice: No film crew or production staff from TLC is permitted on this property under penalty of trespass.”

The reality show, which boasted 10.3 million viewers after July’s divorce episode, has lost fans at a rapid pace over the course of the ugly breakup, but many tuned in for this final, emotional
episode, which ended with a montage of the family.

There were also much philosophizing from Kate and Jon.

Concerned about what will come next for them, Kate talked about why the show was the ideal job, since she could stay with the kids, while
providing for them and showing them the world.

“Our show has provided opportunities we wouldn’t otherwise have had,” she said. “This is a very bittersweet goodbye for me, because the kids are already missing it. I feel like it’s been taken from
us, from me and the kids.”

Jon, who has gotten some seriously bad press out of all this drama, has tried to show his growth, saying, “I think I became more educated…about myself and what I’ve learned in the last couple
months about myself. Always looked for blame and never really took blame, and now I’m taking blame. I can own up to it. I gotta stop being a kid. I gotta grow up one day and take initiative and be
a man.

He claims the paparazzi and bad press gave him a wakeup call, and talked of his hopes to become friends with Kate while moving on with Hailey. Perhaps that’s why he recently handed Kate full
custody of the kids, along with a bouquet of flowers. Or maybe that’s just another publicity stunt.

Kate, for her part, claims the kids don’t — and won’t — know about Hailey, but it’s clear the older twins, Mady and Cara, are already having issues with dad. They gave him so much trouble during
the finale that he didn’t let them participate in the family’s lemonade stand.

“He’s still their dad. They love him and need to see him,” Kate insisted.

She also claimed that in the last eight months, she’s learned that she’s stronger than she realized and has become aware of who she can’t count as true and supportive friends.

While her ex is splitting his time between New York and his “country place,” Kate, who has talked of acting in the past, is left to decide where to go next.

“I never had a clear picture of how it would end, but I think it’s too soon,” she said.

SheKnows is crossing our fingers for the clan, but also hoping the cancelation means we won’t be hearing as much about this ugly break up.

Read on for more Jon and Kate

Jon and Kate: Keys to their marriage doom