Adam Lambert’s November 25 performance on Good Morning American may have been cancelled due to his racy AMA performance, but that seems to be only the beginning of the backlash against the former American Idol.

In the wake of Adam Lambert’s homoerotic AMA performance, Good Morning America did cancel his concert, saying that type of
performance would not work “early in the morning.”

Lambert has been the talk of the town since he closed out the AMAs Sunday night by kissing his male keyboardist, stimulating oral sex with another dancer and flipping off the crowd while performing
his single, For Your Entertainment.  And now…moms are chiming in and they are not happy. 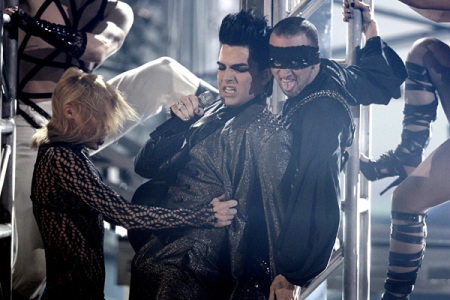 As of yesterday, ABC was reporting that 1,500 people complained about the raunchy show closer and just about every news site and blogger posted an opinion and a clip of the East Coast feed of the
performance, which was uncensored.

Dick Clark Productions was quick to remove any footage from Youtube, however, and while ABC gauged the level of complaints as a “moderate” response, it seems it was enough to get Lambert booted
from GMA.

“Given his controversial American Music Awards performance, we were concerned about airing a similar concert so early in the morning,” explained an ABC rep.

Lambert was unapologetic when he spoke with Access Hollywood right after the show, saying, “You know, honestly, if I offended some people, you know, its apples and oranges. I’m not an
artist that does things for every single person. I believe in artistic freedom and expression. I believe in honoring the lyrics of a song, and those lyrics aren’t really for everybody either.”

“If it’s edited, that’s discrimination,” he continued. “I will be disappointed because there is a little bit of discrimination going on in this country. There’s a big double standard. Female pop
artists have been doing things provocative like that for years and the fact that I’m a male and I’ll be edited and discriminated against could be a problem.”

The female performers that come to mind are, of course Madonna and Britney Spears, who shared that infamous MTV kiss back in 2003 and were, in fact, celebrated for it.

Many theorized that the only reason Lambert didn’t win American Idol last season was that he did nothing to hide being gay. Since coming in second, he’s been very open about his sexual
orientation, as well as his desire to push the envelope. He seemed quite sure he’d be edited, and SheKnows suspects he was hoping for this kind of backlash.

While he hasn’t been heard from since GMA gave him the boot, Lambert is scheduled to appear on The Early Show on CBS on November 25 instead — and should have an earful for
us.

RealMomsGuide sounds off on Adam Lambert