Adam Lambert thinks the hubbub over his racy AMA performance is a double-standard, but ABC is having none of it. 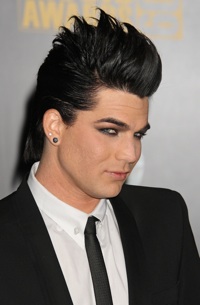 ABC was not amused by Lambert’s shenanigans and left a boy-on-boy kiss on the cutting room floor by the time West Coast viewers got the feed.

Why is this so shocking? Janet Jackson used some of the exact same moves in music videos from the 1990’s — If I Was Your Girl and
That’s the Way Love Goes immediately jump to mind — and Lambert says the furor is nothing more than a double standard.

“You know honestly, if I offended some people… it’s apples and oranges. I’m not an artist that does things for every single person. I believe in artistic freedom and expression, I believe in
honoring the lyrics of a song, and those lyrics aren’t really for everybody either. There’s a big double standard, female pop artists have been doing things provocative like that for years, and the
fact that I’m a male, and I’ll be edited and discriminated against could be a problem. People are scared and it’s really sad, I just wish people could open their minds up and enjoy things, it’s all
for a laugh, it’s really not that big of a deal.”

The network released the following statement: “Given his controversial American Music Awards performance, we were concerned about airing a similar concert so early in the morning.”

The real question is why is Lambert so shocked? ABC is owned by Disney. There’s no dry humping in the Magic Kingdom!