Ice Castles originally premiered in 1978 and captured the hearts of an ice skating-frenzied America. Fast forward to 2009 and the redux, which brings back the story of a young figure skater who must rediscover her talent after being suddenly blinded, is no less poignant. 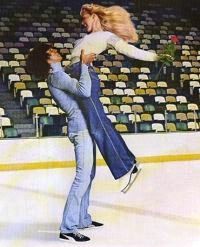 Ice Castles is
not just another ice skating movie; it was also one of the most popular films of the 1970s.

Filmmaker Donald Wrye made Ice Castles in 1978 and returns to bring back his classic for not only those who love figure skating, but a good love story. American figure skater
Taylor Firth makes her film debut in Ice Castles that also features appearances by Michelle Kwan, Andrea Joyce and Molly Oberstar.

The Ice Castles remake lands on DVD Feb. 9, 2010 and SheKnows has an exclusive first look.

Ice Castles is the story of a young figure skater with the Olympics in her sights only to have that dream darkened by an accident leaving her blind.

Her boyfriend (portrayed in the remake by Rob Mayes) sticks by her side and aids the skater in finding her way again, on and off the ice.

The original film was an emotional and inspirational piece of filmmaking. With the same director behind the camera, expect great emotional peaks and valleys from the very modern, new millennia
Ice Castles.

Up: Pixar does it again