Fantastic Mr Fox is an animated tale from the marvelous filmmaking mind of Wes Anderson. The mind behind Bottle Rocket, The Royal Tenenbaums, The Life
Aquatic with Steve Zissou and The Darjeeling Limited tackles his first animated feature with Fantastic Mr. Fox and the results are magnificent. 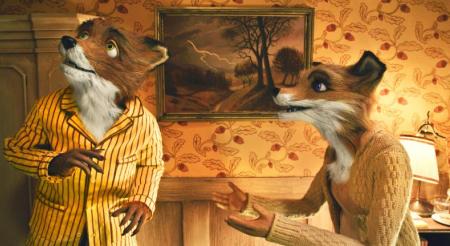 Mr and Mrs Fox (Clooney and Streep) are living
the perfect life. With their dream home and their son Ash (Schwartzman), visiting nephew Kristofferson (Anderson), it seems the world is
perfect. Yet, after 12 years of domestic bliss, Mr Fox’s wild side is beginning to rear its nature-calling head. Before long, Mr Fox is stealing chickens from coops again — a life Mrs Fox
thought he had left long ago.

With Mr Fox’s fateful act, he has launched his entire domestic bliss-laden family into a world of danger. The farmers are not amused at the missing chickens and Mr Fox and his family must
head underground to hide. In the end, Mr Fox has to become Fantastic in order to save his family.

A touching tale that is perfect for the entire family, Fantastic Mr Fox lands in theaters Thanksgiving Day and its timing could not be more perfect. Gather around the family and take a
sneak peak with SheKnows exclusive clip from Fantastic Mr Fox and then head to theaters after that delicious Thanksgiving dinner and enjoy some fantastic family film fun.

And don’t even get us started on the pairing of film icons Clooney and Streep!