With the opening of The Twilight Saga: New Moon, is it any surprise the vampire romance came in first place? The film from the Twilight series opened worldwide at $258.8 million.

Summit Entertainment’s New Moon won the accolade for best weekend opening of all time with $140.7 million representing 4,024
theaters. The female-fueled flick shows that movie-goers, both male and female, have run into theaters to see this film. 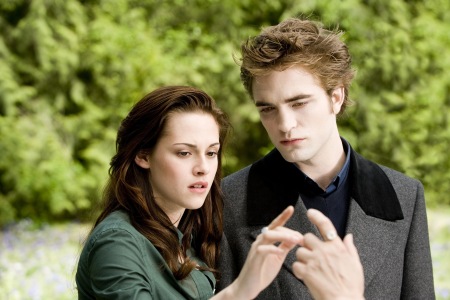 Just in case you didn’t already know, in Twilight Saga: New
Moon Bella recovers from the vampire attack that almost claimed her life. Excited, she wants to celebrate her birthday with Edward and his family. Thanks to a minor accident, blood is shed
and it’s too intense for the Cullens as they decide to leave town. Danger awaits as Bella seeks comfort in reckless abandon which includes seeking solace with Jacob Black.

In second place, Sandra Bullock continues to sparkle. Warner Brothers’ true-life family drama, The Blind Side, debuted domestically to $34.5 million in 3,110 theaters. The film is
based on a true story of a poor, homeless, oversized and under-educated teenager is recruited by a major college football program where he is groomed into an athletically and academically
successful NFL prospect. As he is taken in by a well-to-do family, they soon discover his presence leads them to insightful self-discoveries as well.

When ticket receipts are combined for New Moon and The Blind Side, they led the second-best weekend ever regarding dollars and cents. Considering this past weekend occurred
outside blockbuster summer months and is on the cusp of a long holiday weekend, movie insiders are anticipating a busy Thanksgiving weekend at theatres.

Tim McGraw exclusive video interview for The Blind Side

The Blind Side review