A movie that tells the tale of a crabby widower begrudgingly becoming a father figure to an earnest boy scout seems like the stuff from which dreams are made… Academy Award dreams, that is — not Disney-branded animated dreams. But does one necessarily exclude the other? Until now, that answer has been a straightforward yes. 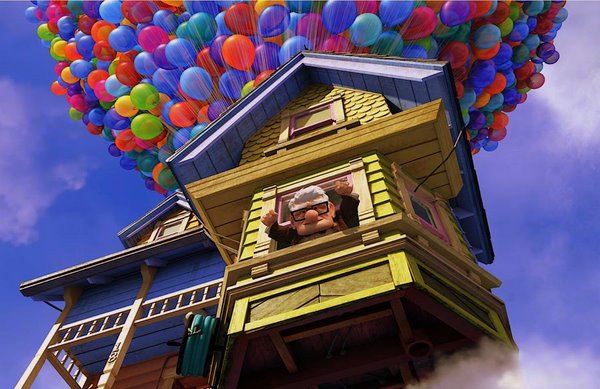 With just one exception, only motion pictures featuring performances by live actors have ever been considered for the Best Picture Oscar. The thinking goes: How could a cartoon even compare to
actual living people acting their hearts out on screen?

A cartoon couldn’t. But Pixar doesn’t make cartoons. They make intensely high-quality feature films that happen to be animated. And in the case of their latest, Up — a love story meets adventure meets self-discovery —  the company proves there’s no reason for them to ever settle for status
quo.

Getting there is half the fun

While Pixar have already earned 22 Oscars across various categories, it’s the art and the appreciation — not so much the awards — that really drives this brains behind the beauty.

Earlier this year, the Up team had the honor of opening the 2009
Cannes Film Festival — the first ever such debut for an animated picture. “I have to say that was the pinnacle — one of the most amazing, surreal experiences ever,” says producer Jonas Rivera of
the Cannes adventure.

“It was the greatest honor. Nothing can top it in my mind. We’re sitting where Alfred Hitchcock was, and Pedro Almodovar, and all these other great filmmakers, thinking, ‘We used to get thrown out
of places like this!’ There we are in the front row, in our tuxedos, sitting on the French Riviera,” he says. “It was phenomenal.”

But what is Up about?

While an overview of the movie’s primary plotline hardly inspires a pithy soundbite, that doesn’t mean the concept is hard to grasp.

A succinct — if not exactly flattering — summary comes from a Vanity Fair magazine review: “A movie about an old guy and a fat kid in a floating house trying to save a rainbow-colored
ostrich from an even older dude and a bunch of talking mastiffs who fly a blimp.” 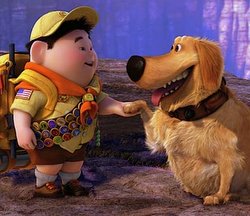 Fortunately, Up — as
the audience at Cannes proved with their standing ovation — is much more than the sum of those oddball parts. How perfectly fitting, then, that the moviemakers themselves are also far beyond the
norm.

After seeing operations at Pixar’s studio in Northern California, you can begin to appreciate how the people at Pixar are true Renaissance men (and, to a lesser extent, Renaissance women).

Bob Peterson, for example, is credited as Up‘s co-director and screenwriter… but he’s also a story artist, story supervisor and has voiced characters in several of the company’s feature
films, including the fabulous Dug in Up. Pete Docter, meanwhile, carries the credits of director, animator and screenwriter.

Even with the perfect players in place, the Disney subsidiary practices patience, and refuses to rush the process. 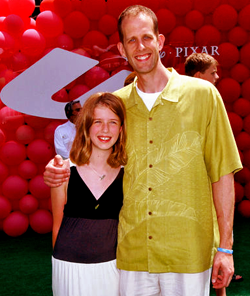 In the case of Up, the 96-minute finished product took about five years to complete. And during the project, each of about
60 animators reportedly produced a mere four seconds of action per week.

With those kind of working hours, though, it’s no small wonder that the production staff tries to pack their films with the kind of personal touches to amuse themselves while making trivia buffs
ecstatic.

In Up, the character of Ellie was inspired by Elie Docter, the director’s daughter. (See them both at right.) His little girl, too, played the voice of Carl’s love, as well as drew several
of the pictures in Ellie’s adventure book.

The DVD version of the movie makes it easier to spot a few amusing Pixar self-references: The Pizza Planet Truck (from Toy Story) and the iconic Luxo Jr ball can be seen on the streets as
Carl’s house breaks free and floats away. Then, Carl and Ellie’s plane tickets show flight 2319 (the kid contamination alert number from Monsters, Inc), and later in the film, Carl is
served the same scallop dinner featured in Ratatouille.

Sharp ears will also recognize that actor John Ratzenberger (Cheers) makes a voice cameo. In fact, since playing Hamm the piggy bank in Pixar’s first feature film, Toy Story,
Ratzenberger has voiced a character in every one of the studio’s full-length movies. With his bit part as “Tom the construction worker,” Up is no exception. 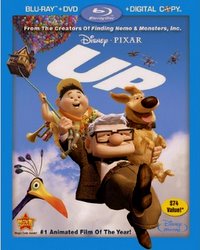 Get up for the holidays

Though this DVD may not feature Santa, Jimmy Stewart or a certain frosty snowman, it still manages to create a cozy Christmas feel that rates right up there with the classics.

Pixar offers everyone who peers into the world of Up a spectacular canvas, allowing any one of us to realize much more than simply a couple hours of entertainment.

Especially in the years following the recent era of wretched excess, the fact that Carl and Russell inhabit a simple-but-not-bare, active-but-not-frenetic world just underscores this movie’s
message: Home is where the heart is — no helium required.