International singing sensation Susan Boyle will make a personal appearance on Monday, November 23 in New York City. Her first public performance in the U.S. will occur at Rockefeller Plaza to celebrate the worldwide release of her debut album I Dreamed a Dream.

Boyle will sing on NBC’s Today Show at 49th Street and Rockefeller Plaza. It’s suggested that fans arrive by 6 am
since viewing is on a first-come, first-served basis. Boyle will sing Wild Horses, I Dreamed a Dream, Cry Me a River and a surprise song as well. 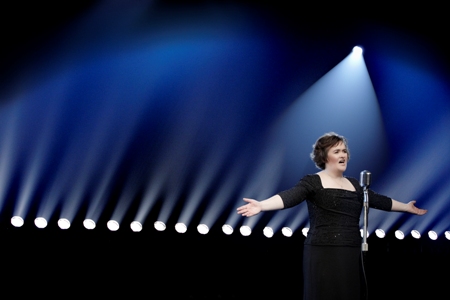 Boyle’s debut album will be released the same day she appears on the Today Show. Her album, I Dreamed a Dream, will include 12 tracks. Most known for belting out tunes to
I Dreamed a Dream and Cry Me a River, other tracks include Madonna’s You’ll See, The Monkees’ Daydream Believer, the Rolling Stones’
Wild Horses and Who I Was Born to Be. The last song was an original recording written specifically for Susan.

You may recall that Boyle catapulted into the spotlight on the talent show, Britain’s Got Talent. Although she lost the competition and was originally mum about the loss, recently
she stated, “I was shocked. Sure, I mean, I am thrilled for Diversity; they deserved it. But I was working so hard, lost in the midst of all the excitement and yes, I felt the dream may be
over after not picking up the winner’s prize. Who would not?”

After the show ended, Susan Boyle was admitted to a rehabilitation center, The Priory, in London. Fans around the globe speculated she was perhaps having a nervous breakdown. While she refuses to
discuss the stint in rehab, she’s referred to it simply as “a nice rest.”

Boyle’s dish on The Today Show

Susan Boyle gets a mini-makeover