Gone with the Wind is considered one of the greatest films of all time. Winner of 10 Oscars in 1939 including Best Picture, Gone with the Wind took the top prize for a year known for phenomenal Hollywood movie making.

1939 was the year of The Wizard of Oz and Mr Smith Goes to Washington, but standing tall above them all was the story of
Rhett Butler and Scarlett O’Hara.

With the film’s remastered release on DVD and the astonishing Blu-ray version, Gone with the Wind takes its rightful place on home movie shelves as a must-have. Available in several
forms including a two-disc 70th anniversary edition DVD and the three-disc Blu-ray box set that has to be one of the year’s best Blu-ray releases. 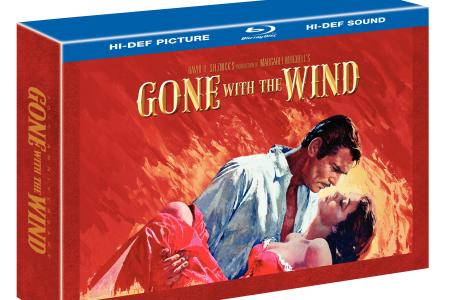 Included in the Blu-ray release is eight hours of extra footage, a 52-page hardcover book on the film as well as a CD soundtrack sampler and art prints from the original film.

Warner Home Video released the Gone with the Wind sets November 17 and SheKnows could not have been more impressed with the Blu-ray package. The DVD is also worth the upgrade if you
already have the film in your collection with its remastered excellence and the addition of historian Rudy Behlmer’s commentary.

When opening the 70th Anniversary Edition Blu-Ray box set, it is as if the viewer has not only been transported to when Gone with the Wind was new, but also impeccably captures the feel of
the movie’s time period.

The Blu-ray release is also a limited edition with only a total of 150,000 produced. A perfect gift for any Gone with the Wind fan or film fanatic for that matter, Victor Fleming’s
masterpiece is a study in a film that sets the standard for how all other films would be judged for the rest of the century. 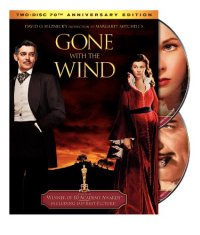 Of course the highlight of this
new Blu-ray version of Gone with the Wind is its sonic and visual excellence. As Warners recently did with the 70th anniversary of The Wizard of Oz, the Blu-ray format is proving
to be quite friendly to the classics.

“You’re going to see, hear and experience so much more with this Blu-ray edition,” said Jeff Baker, WHV Executive Vice President and General Manager, Theatrical Catalog. “Viewing
Gone with the Wind again on Blu-ray is like seeing it for the first time. You’re brought into the saga of the war torn Tara so intensely, you feel as if all the characters literally come
alive. At times, I felt as if I was on the set standing next to the camera watching Gable and Leigh as the whole scene unfolded.”

New features available for this 70th anniversary edition of Gone with the Wind include the documentaries:

Gone with the Wind is the grandest, most ambitious and spectacular piece of filmmaking in cinematic history. With more than 50 speaking roles and 2400 extras, the film is the
quintessential Hollywood epic.

Clark Gable, Vivien Leigh, Leslie Howard and Olivia de Havilland starred in Gone with the Wind, which has thrilled audiences for decades with its eternal love affair, set in the South
against the backdrop of the Civil War. The star-crossed lovers, dashing Rhett Butler (Gable) and his headstrong heroine Scarlett O’Hara (Leigh), charm new generations with the passing decades
and with the 70th anniversary edition of the film now out on DVD and Blu-ray, legions more will learn the majesty of getting Gone with the Wind.

Read on for more DVD and Blu-ray news

Bruno bonus clip not seen in the film

The Ugly Truth online exclusive: over 5 minutes of the film!