These were the hottest entertainment news stories for the week ending November 20, 2009. 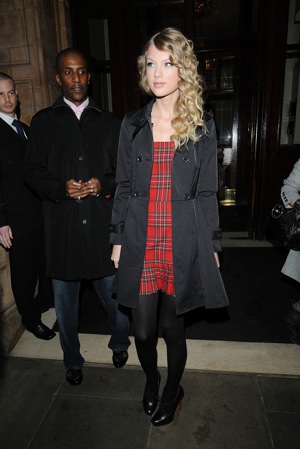 Now this is how you wear plaid, my pretties… Taylor Swift knows to keep it simple when wearing something this bright. She pushes her short red plaid dress by keeping everything else a neutral
black — shoes, tights and coat. The red of her dress makes the red soles on her Louboutin booties pop!

Twilight lovers rejoice! New Moon is upon you. You can battle it out between Team Edward and Team Jacob (which seems silly, because even I know who gets the girl and I don’t even read the series…) and rapturously pore over pics of your fave Twilight actors.

Janet Jackson normally keeps her lips zipped about her personal life — the woman was married for years and no one knew until after the divorce — but she’s breaking that rule now and talking about
the death of her brother Michael Jackson. While Janet admits Michael had a drug problem, saying the family tried to help him many times, she squarely points the finger at Dr Conrad Murray. PS – She looks amazing. PPS – The father who accused Michael Jackson of molesting his son killed himself this week.

Ugh — poor Nicole Richie was sent straight to the hospital after court, testifying against paparazzi and getting a restraining order
against an overzealous photographer. No swine flu for Nicole — she’s got a nasty case of pneumonia. With two little ones at home and her baby daddy Joel Madden overseas with his band Good
Charlotte, let’s hope Nicole feels better soon!

26 mins ago
by Hanna McNeila