The holidays turn into a Holidaze tonight on Grey’s Anatomy, with Thanksgiving, Christmas and New Year all rolled into one episode. Needless to say, that makes for a lot of family drama.

Lexie is taken aback when she finds Mark staring up at another young hottie (Leven Rambin), only to find out the other woman is his daughter! Mark is just as shocked by the news, but will step to the plate when he learns why she’s tracked him down. (There’s even a crossover slated for January, where he’ll bring his daughter over to Private Practice.) 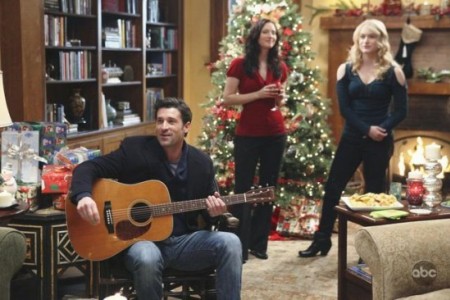 The Grey’s Anatomy Holidaze will also bring some daddy drama for Miranda, whose disapproving father comes to town, and Meredith, who finds herself caught in her mother’s love triangle. She ends up defending the chief to her father and then to Derek, but SheKnows isn’t sure that’s the right call, considering she’s the one who caught the chief drinking last week!

On the romantic front, Teddy’s admission about her feelings for Owen will make for serious tension between the army pals. We didn’t get to hear how Owen feels about Teddy, but whatever his take, Cristina is picking up on the tension. It won’t make thing any easier for the trio now that Cristina has accepted Teddy as the cardio god she’s been waiting for.

SheKnows actually got some one-on-one time with Kevin McKidd (Owen), who is having a blast playing this triangle with Kim Raver and Sandra Oh. Don’t miss our exclusive interview!

Sidestep to the Net

During the commercial break before Private Practice (or anytime after 10 pm), you can head to ABC.com to catch the first of six very short installments of Seattle Grace: On Call. Using a documdrama style, the new webisodes will follow the trials and tribulations of the Seattle Grace interns as they unwind at Joe’s, the local bar from the show.

Then it’s out to Los Angeles, for Private Practice, where the daddy drama continues, albeit with a new host of doctors.

The staff is intrigued when they catch Addison facing off against a handsome, older man, played by guest star Stephen Collins. They assume it’s a romantic thing, but it’s her dad and she’s none to happy to see him. In fact, she kicks him out!

Not sure what brings him to town, but word is he’ll be back in December, along with JoBeth Williams as Addison’s mom.

Papa Dell comes to work with a wedding ring and the group is not thrilled when they hear he’s gotten hitched to his druggy baby mama, Heather. He insists she’s clean and sober, calling the news “great,” so they bands together for an intervention.

Before they can get into anything, however, Cooper is arrested! It all has something to do with his refusal to cooperate in a case involving a longtime patient.

Meanwhile, in the other office, Pete is intent on keeping a patient alive long to see his son born. He even considers working with new addition Gabriel, but Naomi’s still not the biggest fan of this gene specialist and is worried about side affects.

Read on for more Grey’s Anatomy and Private Practice news