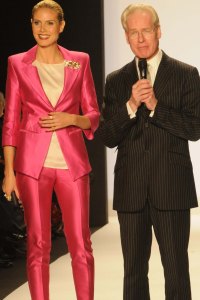 Project Runway’s final three ladies, Carol Hannah, Althea and Meana-Irina, who all happen to be under 30, are back for Part 2 of the
finale to show off their 12-piece collections.

We got a bit of a tease on their lines in Part 1 and Tim seemed somewhat impressed with everyone’s work. He did have a few bones to pick with the contestants and definitely wasn’t thrilled with
Irina’s lack of color, but this season’s bad girl shrugs off his concern and word is, it ends up working for her.

Before the big Project Runway showdown, however, the ladies must each hustle to create one extra look for
the catwalk. To that end, they have some assistance from returning players — Carol teams up with Christopher, Althea with Logan and Irina with Gordana.

The tensions are sure to run high tonight — and not just because of the drama between Irina and Althea. Many fans are hoping for a final catfight, but it looks like time may be too tight for that
kind of action. Then again, there’s always time for a cat fight, isn’t there?

At any rate, between fluish and worn out contestants, broken zippers and general preshow pandemonium, Tim eventually cries that he’s “about to lose it.” Now that alone would be worth tuning in for!

Whatever goes down, however, Heidi Klum takes the stage to kick things off and the show (which was shot back in February) will go on.

Tune in November 19 at 10 pm to see who takes home the big prize.

Dancing with the Stars announces its finalists