Move over Sarah Palin, there’s another celebrity on the campaign trail promoting a book. Perez Hilton, celebrity blogger hated by Hollywood, announced that his next book, True Bloggywood Stories: The Glamorous Life of Beating, Cheating, and Overdosing, will be released on December 1st. 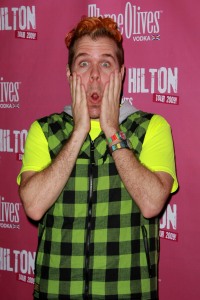 Perez’s book will
go directly to paperback instead of being released as a hardcover first. He mentioned he wants it to be affordable for his readers. Apparently it will “shed new light on all the juicy shiz
that went down this year with the famous — and the infamous.”

Known for making several celebrities angry with his antics, including the latest which included a newly pregnant Bethenny Frankel. The Real Housewives of New York star had not even told
her in-laws the good news as Perez broke the story. The infamous blogger has noted that celebrities are not going to be too happy after
they read his book. He adds, “and we wouldn’t have it any other way!”

In fact, the man who has built an empire based on celebrity gossip is already outselling Carrie Prejean on Amazon.com. He’s also outselling Spencer Pratt and Heidi Montag. As an extra bonus
to fans, Perez says he’ll sign copies of his book which are sent to him with return postage.

You may recall this past January Perez’s first book hit the shelves: Red Carpet Suicide: A Survival Guide on Keeping Up With the Hiltons. The founder of PerezHilton.com managed to
twist the guilty pleasure of celeb gawking into a survival guide.