Miley Cyrus is no Twilight fan. 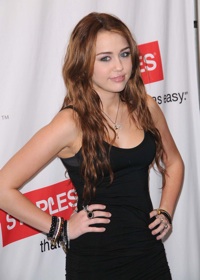 The Disney star gave a super-annoying interview in which she said “like” almost every other word. In between her Valley Girl, nearly incoherent rambles she managed to rain all over the Twilightparade.

It sounds like she was going to attempt some kind of hardcore fundamentalist stance against occult figures but thankfully realized she’s not intellectually equipped for such discourse, so she switched to the fear factor of werewolves, then finally a fashion critique.

So, guess that’s no to Team Jacobthen?

“I feel really lame because everyone’s, like, so excited. I’m like, ‘Don’t even talk about it’,” she said.

Since no one care what Miley Cyrus thinks, New Moon is already enjoying the highest advance booking sales in movie history and is projected to pull in at least $85 million in its opening weekend.