Sarah Palin hit Facebook to gripe about the photo of her that Newsweek chose to run on their cover. Palin is calling the Newsweek cover sexist, while noticeably failing to respond to the insulting story they actually wrote about her. 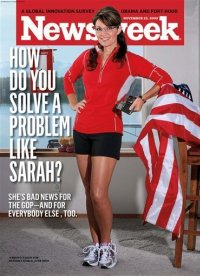 “The Runner’s
World magazine one-page profile for which this photo was taken was all about health and fitness,” she posted on Facebook.

“The out-of-context Newsweek approach is sexist and oh-so-expected by now. If anyone can learn anything from it: it shows why you shouldn’t judge a book by its cover, gender, or color of
skin. The media will do anything to draw attention — even if out of context.”

That’s an interesting conclusion for a woman who’s been on a media blitz to hock her new book, Going Rogue: An American
Life, which many critics claim doesn’t always line up with reality.

What more, while her outrage has succeeded at earning her much attention, we’re not sure how the choice of cover shot “shows why you shouldn’t judge a book by its cover, gender, or color of skin.”
We know we shouldn’t do that, but the comment doesn’t seem to fits in this…er, context!

To be honest, this particular SheKnows reporter can’t decide how she feels — not even with a trusty women’s studies degree in her pocket. A woman in a long sleeve jogging outfit isn’t exactly
sexy. Then again, we can’t remember the last time we saw so much leg on the cover of Newsweek.

The fact that Palin has managed to turn this cover situation into front burner chatter by using a hot button word like “sexist” just feels like a ploy, especially as it’s easier to rile folks up
against sexism then it would be to defend against the article’s actual message.

The headline, which she apparently takes no issue with, asks the questions, “How do you solve a problem like Palin?” The story tease is, “How Sarah Palin Hurts the GOP And the Country,” and the
story itself starts off, “Moderate Republicans — yes, they are not yet extinct, though most are in hiding — scoff at Sarah Palin and wish she would go away.”

For the record, apparently three in four Americans agree with that wish — regardless of where they fall on the political spectrum – and yet, here she is, front and center,
Going Rogue, as she loves to have it.

SheKnows wants to hear what other women have to say on this, so leave a comment and let us know your take on the photo!