At the New Moon premiere, it was screams galore for Taylor Lautner, Kristen Stewart and Robert Pattinson. For The Twilight Saga: New Moon, all the vampires and werewolves on hand. 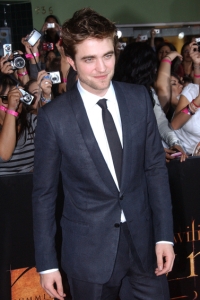 The New Moon stars were out for the Los Angeles
premiere November 16, as were the thousands of fans hoping to catch a glimpse!

It was utter fandemonium in Westwood as Pattinson, Lautner and Stewart made their way down the red carpet for their New Moon premiere.

Fans started lining up the week of November 9, camping out over night and then taking shifts to shower up for the big event last night. It all paid off, with most of the stars taking the time to
meet, greet and sign autographs, including the much adored leads.

There were even some noticeable Twi-hard stars out to catch the premiere and rub shoulders with the Twilight crew, including Glee’s Lea Michele (Rachel), DWTS alum turned
songstress Julianne Hough, SYTYCD judge Mary Murphy, the legendary Joan Jett and even rapper 50 Cent. 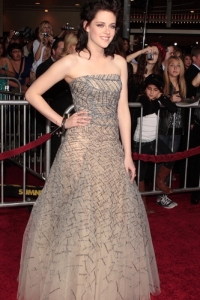 SheKnows could go on dropping names, but we’ll move on to the noticeably absent: Rachelle Lefevre, who played evil
Victoria, was MIA last night. She was busy with a pet emergency, but was also still smarting from the behind the scenes drama that’s left her out in the cold for the final two Twi-flicks.

Her evil character has been recast, with Bryce Dallas Howard taking on the role, so Lefevre tweeted to fans, “being fired from Eclipse tonight was just 2 emotional 4 me & I couldn’t manage it.
So sorry.”

Also missing from the carpet was any affection from stars Pattinson and Stewart. The much gossiped about couple seemed to be intentionally avoiding each other’s space and while Stewart did have
some fun on the carpet with Lautner, he was also missing someone — his supposed girlfriend, Taylor Swift.

As a side note, the Twilight crew is committed to keeping a fan-tastic relationship with its Twi-hards and in that vein the red
carpet press line included a special section. Fansite bloggers and hosts were given their own spot on the carpet! Then, while they were still buzzing over getting to interview their faves, they
were given a last minute surprise — tickets to the premiere!

The rest of us have to wait until November 20, when New Moon hits theaters.

Read on for more New Moon

Check out the New Moon trailer in high-definition