Star Trek debuts on Blu-ray and DVD November 17 and we have an exclusive video from the DVD. Zoe Saldana stars in our exclusive clip from the home video release of one of the year’s biggest films. 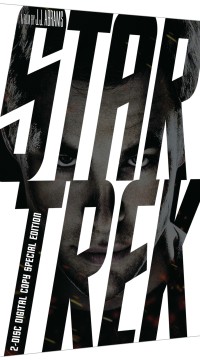 Director JJ
Abrams’ phenomenal update and reboot of the legendary adventure soars onto DVD and Blu-ray. Star Trek hit theaters in
early summer 2009 and by the time it was done with the international box office, it had earned $375 million.

Abrams’ love letter to Star Trek comes to home video in several forms: The traditional single and two-disc DVD and the three-disc Blu-ray.

“I cannot wait for fans of Star Trek to check out the home entertainment release of the film. The behind-the-scenes features on the DVD — and especially the Blu-ray — give a
wonderful look at the crazy hard work and incredible fun that went into making this movie,” Abrams said.

“The cast and crew were truly extraordinary to work with — watching these special features, you’ll see why. And for people who didn’t catch Star Trek in the theater, I hope they do
now, as Paramount has done an exceptional job with this release; the picture and sound quality are both excellent.”

Bursting with action, director Abrams’ Star Trek satisfied decades-long fans as well as an entirely new generation with his reboot.

The Star Trek DVD and Blu-ray bonus features take audiences on a journey few have gone before. Besides the commentary by Abrams, writers and producers, Star Trek DVD — as serious
as this film is — also includes a priceless gag reel.

The Blu-ray, specifically, includes deleted scenes revealing a storyline with Bana’s Nero that has never been seen. Also, don’t miss Abrams’ vision for the notorious Klingons.

In addition, the Star Trek Blu-ray adds three hours of bonus materials. Most notably are the enjoyable “branching pods” that allow the viewer an even more enhanced view of the
Abrams’ Star Trek journey. Whether a longtime fan or neophyte to the world of Star Trek, the Starfleet Vessel Simulator is a blast! And in a move combining science with fiction,
the producers secured an exclusive feed to NASA’s own real-world space exploration narrative.