Kelly Osbourne, Donny Osmond, Mya and Joanna Krupa have made it to the final four and neither flu nor feet will stand in their way as they hit the dance floor for the Dancing with the Stars semi-finals! 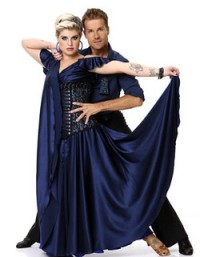 Mya’s been fighting the
dreaded flu that’s been making the rounds on DWTS, and even
got a B-12 shot to hold her over. She and partner Dmitry Chaplin were the judges favorites last week, with an almost perfect score, and she tweets that fatigue didn’t stop her from “all work, no
play” as she and Chaplin prepare to dance a slow waltz, salsa and samba.

Super model Joanna Krupa and partner Derek Hough are set to hit the
floor with a Viennese Waltz, salsa and cha cha, but she too was looking down the flu barrel. After tweeting, “I ve been feeling lightheaded, dizzy, hard to focus, cloudy and eyesight a little
blurry,” this morning found her, “Feeling better than yesterday so am praying it I’ll stay that way all day and nite.”

Donny Osmond declared himself recovered from the flu on Twitter last week, and as the lowest scorer of the group last week, he’ll need his strength to dance a samba, jitterbug and tango with
partner Kym Johnson!

He previews, via twitter, that he and Johnson are “Taking some risks” and then quipped, “I took out collision insurance on my hips — just in case the floor gets too close.” After a few hours of
rehearsing, the funny guy posted the update, “Every week we have a ‘pop quiz’ where something in your body goes ‘pop'”

Meanwhile, Kelly Osbourne hit her pain threshold this week, but is back on
her feet – literally – and ready for action with her partner Louis Van Amstel after cortisone injections.

We’re not sure what two of her dances will be, but before the drama with her feet, she tweeted, “I think I might shock a few people with our rumba!”

Tomorrow’s results show will offer performances from Leona Lewis, Alicia Keys and Barry and Robin Gibb, while former contestant Melissa Rycroft has been in rehearsal with her third place partner,
Tony Dovolani. “We’re baaaaacckkk!!” she tweets.

But before we get to that, the Top Four have to survive tonight, and the showdown kicks off on ABC at 8 pm.