Still set on marking some territory at NYU, Blaire (Leighton Meester) knows old money doesn’t count with the hip kids at
Tisch. Instead, it’s all about the showbiz connecs. Determined to prove her worth, she tries to land Lady Gaga for a private show. Blair usually gets what Blair wants, but SheKnows can’t tell all. 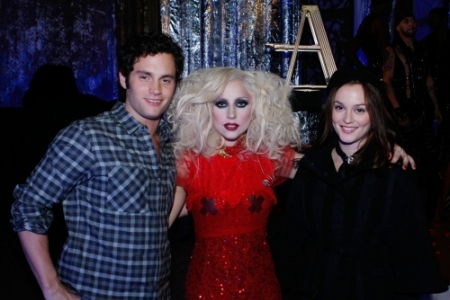 Suffice it to say Lady Gaga does make an appearance, and the performance should be as wild as fans expect, considering Gaga takes the stage in a 30-foot-long dress and has referred to the
appearance as “performance art.”

Off campus, Nate (Chace Crawford) gives Serena back up, because she’s still on the outs with Blair. Meanwhile, Jenny (Taylor Momsen) plays hostess to Damien (guest star Kevin Zegers) as a favor to
Chuck (Ed Westwick), and she gets more than she bargained for.

That action starts November 16 at 9 ET/PT on the CW.