What is the secret to happiness? Author Sarah Dunn explores this question in Secrets to Happiness, her sassy novel that revolves around an interwoven group of 30-somethings living in New York. 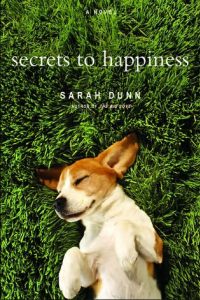 At the center of the
novel is Holly Frick, 35-year-old divorcee who loses her faith after her husband unexpectedly leaves her. To make matters worse, her first novel — a thinly-veiled attack on her ex-boyfriend —
fails miserably. In the aftermath, she finds herself teaming back up with her ex writing partner, Leonard, dating a much-younger boy toy and adopting a dog with cancer. And you thought you had
problems!

The characters in Secrets to Happiness are all seriously flawed in one way or another. Whether targeted toward Holly’s troubled writing partner, her self-destructive ex-boyfriend or
her adulterous best friend, Dunn’s sharp humor is both insightful and poignant.

What makes this novel so special is Dunn’s ability to engage the reader in the lives of many different characters at the same time.

Rather than making them simple and cardboard, Dunn does an excellent job of providing depth and making you root for these people even as they make questionable decisions in the name of finding
happiness.

Fans of Sex and the City will enjoy the pace and wit of this emotionally truthful novel. Deeper and more thought provoking than I
had expected, I found Secrets to Happiness a delicious way to spend a rainy or lazy afternoon. Out of five stars, SheKnows chick lit gives Dunn’s book: