Janet Jackson is finally getting into the specifics of her brother’s death — and she’s pointing fingers. 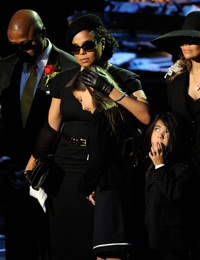 The singer, who is set to perform at this year’s American Music Awards, told ABC’s Robin Roberts that she firmly believes Dr Conrad Murray is to blame for the untimely death
of Michael Jackson.

“He was the one who was administering,” she told Roberts. “I think he is responsible.”

Murray is still under investigation by police and has admitted giving Jackson the powerful drug propofol, which the coroner pinned as the cause
of his death.

“I couldn’t believe it,” she said. “I was at my house in New York. You know, another day. Another morning. And I get a call… [my assistant] said, ‘Your brother’s been taken to the hospital. It’s
on CNN right now.’ I called everyone… I spoke to Mother. I spoke to Tito. I spoke to my nephew, Austin. I spoke to my sister, La Toya. I
told them to call me when they got to the hospital. And I remember thinking, nobody’s calling me back, so I tried calling again, and that’s how I found out that he was no longer.”

“It didn’t ring true to me,” she remembered. “It felt like a dream. It’s still so difficult for me to believe.”

Janet is also rumored to have broken up with longtime love Jermaine Dupri before her brother’s death. “It’s been a tough year,” she said. “You have your days where it’s just, really, it’s hard to
believe. And a day doesn’t go by that I don’t think about [Michael].”