John Cusack, Amanda Peet and a fleet of impressive effects brought 2012 to the top of the weekend’s box office. Roland Emerick’s (The Day After Tomorrow almost tripled its number-two film competition, Disney’s A Christmas Carol.

2012 earned $65 million to A Christmas Carols’ $22.3 million for the November 13 weekend. In turn, A Christmas
Carol’s second-week earnings were leagues ahead of its number-three cinematic rival, The Men Who Stare At Goats. The George Clooney instant classic took in another $6.2 million
to bring its two-week total to $23.4 million. 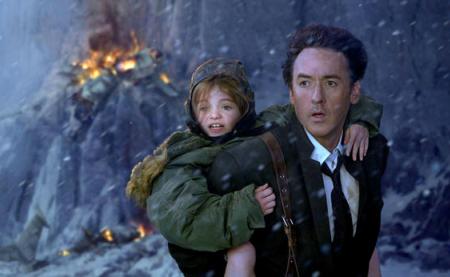 From producers Oprah Winfrey and Tyler Perry, Precious landed in fourth place with its $6 million.
Precious is based on the novel Push by Sapphire and is generating major Oscar buzz for Best Picture, Best Actress , for Mo’Nique, Best Supporting Actress.

Michael Jackson and his concert documentary of what could have been, This Is It, achieved a milestone with its second week of release, becoming the world’s highest-grossing documentary of all time.
This Is It has earned $67.2 million in the US alone. Look for This is It numbers to pass $100 million before its run
is completed in the US.

The alien abduction thrill-fest The Fourth Kind took sixth with $4.7 million, while Couples Retreat continued its unlikely
six-week run in the box office top 10 with another $4.2 million. The Vince Vaughn, Jon Favreau, Kristen Bell and Jason Bateman film has earned a US box office total of $102 million.

Closing out the box office top 10 at number eight is Paranormal Activity, whose $4.2 million pushed the
independent shocker past the esteemed $100-million mark. Paramount Pictures’ surprise hit has earned $103.8 million in the US alone.

The Jamie Foxx and Gerard Butler action film Law Abiding Citizen continued its run, proving both stars are currently at the top
of their box office games. Foxx and Butler’s crime and punishment flick has amassed $67.3 million in five weeks of release.