Few child stars make the transition to super star and even fewer teen hunks manage to do it, but Leo DiCaprio celebrated his thirty-fifth birthday November 11 as a $20 million-a-picture superstar with producer credits to his name. Leo is just getting started! 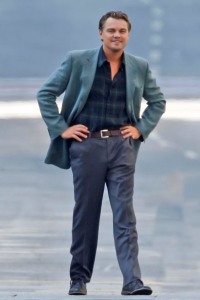 The LA
native kicked off his career 30 years ago, with a behind the scenes tantrum on the now defunct kiddie show Romper Room, and spent his teen years working the TV scene, including stints on
the soap Santa Barbara and the sitcom Growing Pains.

DiCaprio’s big breakthrough came at 19 with This Boy’s Life, his flick with Robert DeNiro and Ellen Barkin. What’s Eating
Gilbert Grape, which came out the same year, landed him his first Oscar and Golden Globe nominations, and the pretty young thing continued to prove himself with tough roles in The
Basketball Diaries and Marvin’s Room.

He put Shakespeare back on the map with Romeo & Juliet and it was, of course, his epic flick Titanic that claims the honor of being the highest grossing film ever and pushed
him into the $20 million stratosphere.

SheKnows can’t possibly mention every movie that’s earned him attention, but it’s worth noting that the biopic The Aviator won him his first Golden Globe and his second Oscar nom, while
officially bumping him into the Leading Role category.

A story making rounds on the net claims he just dropped $1,400 on beauty products geared at anti aging and while his rep says they were a gift for someone else, SheKnows reminds you that we’ve seen
how the years may treat his famous mug. We got a sneak peak in Revolutionary Road, which was not overly kind in the makeup
department, and he looked good to us!

He’s maintained onscreen credibility by starring in big hits that stretch his talents with characters ranging from romantic leads to megalomaniac businessmen, and now he’s promising to scare us
silly with Martin Scorsese’s upcoming Shutter Island, due out in 2010, and Inception, a Christopher Nolan sci-fi thriller currently in the works.

He’s also managed to balance his rep for dating hotties like Gisele Bundchen and Bar Refaeli with his efforts to save the world. In 2007,
he produced, co-wrote and narrated the documentary The 11th Hour, and half of his official website is devoted to his commitment to
the environment.

Leo celebrated last night at Villa and then at home, with a host of big names. No word on whether childhood pals Tobey Maguire, Lukas Haas and Kevin Connelly were on-hand, but cameras did catch
Lindsay Lohan and Ryan Phillippe making their (separate) exits.

This has of course led to speculation about Leo and LiLo… but we won’t go there today.

Instead, SheKnows raises our flutes to wish him a happy birthday. We can’t wait to see what the next 35 bring for the king of Hollywood!