These were the hottest entertainment news stories for the week ending November 13, 2009. 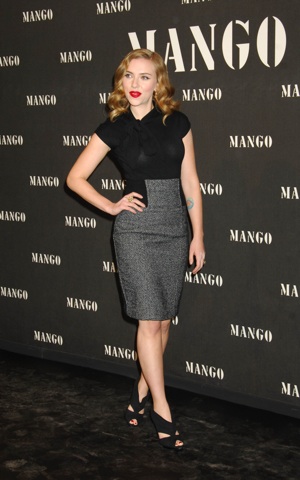 Scarlett Johansson rocks this tweed and black form-fitting dress with a tie neck, which shows off her famous curves without showing too much skin. Her best accessory? Signature bright red lips.
Scarlett wore the look at the Mango New Collection launch party in Madrid.

Dethroned — and now disgraced — former Miss California USA Carrie Prejean made her film debut this week with the discovery of a solo sex tape. More proof that Prejean is a hypocritical liar of whom any Christian should be ashamed? She lied about her age when the tape was made, claiming she was 17 and
threatening child pornography charges against anyone who posted it online. But the boyfriend to whom she sent it verified she was 20, well above legal age. Liar liar pants on fire — oops, she
wasn’t wearing any pants!

It was a big night for teen country sensation Taylor Swift, with no interruptions to steal her spotlight at the 2009 CMAs. She won in all four
categories in which she was nominated, including the coveted Entertainer of the Year award, beating out Kenny Chesney’s expected record-breaking win. Go Taylor!

Fergie deflects to save her marriage

Look, if you don’t think Josh Duhamel cheated on Fergie, you’re crazy. But it’s obvious that Fergie subscribes to the Stand By Your Man school of wivery and she’s not going to leave him —
not after less than a year of marriage, anyway. In fact, she’s so firm in this decision that she’s started an expert PR campaign to deflect
attention away from her cheating hubs by talking about how she likes to sleep with chicks and had to go to therapy to realize that would be cheating. See, didn’t that image make you totally forget
about Josh and the stripper? Didn’t think so.